Ever Used Pants As a Blanket? It’s All About Small Steps For Big Change + Simmered Sweet Potatoes 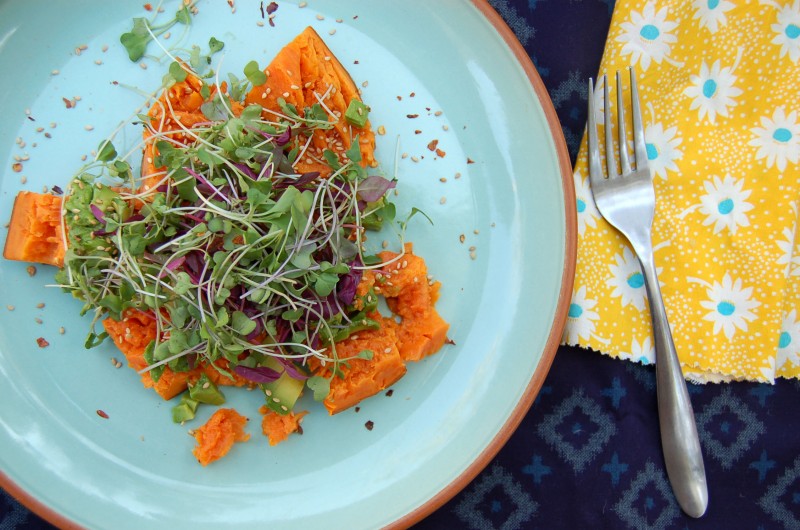 Have you ever thrown a big get together at your house and then went to sleep before the party was over?

In today’s fuckery, let’s say you did throw a party at your house and you woke up to a hot mess.

Not one single dish has been brought to the kitchen, there’s a layer of popcorn on the floor that could pass as carpet and your cat is looking up at you like “What the hell happened to my house?!”

There’s music coming from somewhere but it’s faint and you can’t find the source. You start to wonder if it’s only playing in your head, but of all the music in the world, why would The fucking Spice Girls be in your brain?

This thought is interrupted when you spot a woman passed out on your couch in nothing but her underwear, a leather jacket and one red cowboy boot. She’s using her pants as a blanket and her other boot is under her head as a makeshift pillow.

You have to stop here for a sec and ponder because she clearly would have had to put the one boot back on after she took off her pants.

Huh. Where was she going with that? You keep moving in a daze.

You reach your backyard and immediately get the sense that Gaga and Miley showed up after you passed out because there’s glitter everywhere, orange road cones have been arranged to form a runway, and there’s a life size blow up Obama that has fallen directly on top of someone, who’s sleeping on what appears to be a game of Twister. And oh, look at that. He’s naked under Obama.

There are empty bottles everywhere, and your yard smells like the combination of beer, tacos and citronella. To top everything off, there are four chickens running around randomly in your yard. This is weird because you’ve been thinking about getting a few chickens but you wanted to wait until after the party.

Now you’re really questioning your sanity, trying to wrack your brain for memories of chicken dealings, but all you can focus on is “if you wanna be my lover, you gotta get with my friends…”

You go back inside, splash some cold water on your face and accept your self inflicted headache and the huge mess that’s waiting for you.

What do you do next?

You start with one small area of your house and you get to work. You decide on the kitchen counters and you don’t stop until you can see them. Once the counters are clean, you tackle another small area.

This time it’s clearing out all the empty bottles. Once the bottles are piled high in the recycling bin outside, it’s time to start on something else.

And you keep going, chunking down the cleanup into small areas until your entire house and backyard is clean and the only remnants of your party is the blow up Obama (let’s face it, you scored with that one), the passed out woman on your couch, and the four chickens pecking the shit out of your gardens.

You take a shower, make the biggest green juice you’ve ever consumed in your life, tell the one shoe lady to go home, and you plunk yourself down on your couch and proceed to watch the entire third season of Orange is the New Black.

Your day is booked.

The reason you were able to get your house spic and span without getting totally overwhelmed and freaking out is because you pared it down into small sections.

You started with just the kitchen counters and then focused on cleaning up just the bottles. And little by little, your house started to look more and more like your (cat’s) home and less and less like Miley and Gaga’s personal stomping grounds.

When you have something really daunting in front of you, focusing on small wins that lead up to a victory is the only way to go at it while remaining sane.

And it doesn’t matter what it is.

Changing your diet, moving, asking for a divorce, running a marathon, quitting drinking, quitting your job, coming out, going back to school, changing career paths, doing a juice fast, deciding to get off your medication, starting a business, or cleaning your house after a huge party.

It’s important to think of the end goal and the bigger picture, but it’s the execution that’ll carry you to that end goal. And executing a goal is made up of repeating different small steps over and over.

And if you’re not exactly sure what changes need to be made to make your life exponentially better, look at your options and pick the one that’s the most daunting.

The one that intimidates and scares you the most and the one that you’re looking forward to the least. The one that you think you’re almost incapable of doing, but if achieved, you know you would be a better person because of it.

If you’ve ever made justifications or excuses out loud or to yourself about why you haven’t done __________ yet, that’s your answer. Pick that one.

The shit that scares us the most is exactly the shit we need to tackle. Because when we do, the entire world opens up to us, and we experience a life that we didn’t know was even possible to wish for.

And when you decide on the change that you need to make, declare it to the universe and start taking small bites, amuse-bouche style until it’s done and you find yourself bathing in the magic of the afterglow.

It’s the big shit that changes your life the most; the little shit just helps you get there.

If cleaning up your diet is a change that you’ve decided on for yourself, consider today’s recipe a small step in getting there.

Sweet potatoes are one of the healthiest foods on the planet because they’re packed full of antioxidants. I wanted to find a way to prepare them that was super easy, but also tasty enough to crave. I managed to do just that with this recipe.

Boiling or simmering sweet potatoes is the healthiest way to prepare them because they retain the most nutrients when cooked this way.

Try it out and let me know what you think in the comments below. 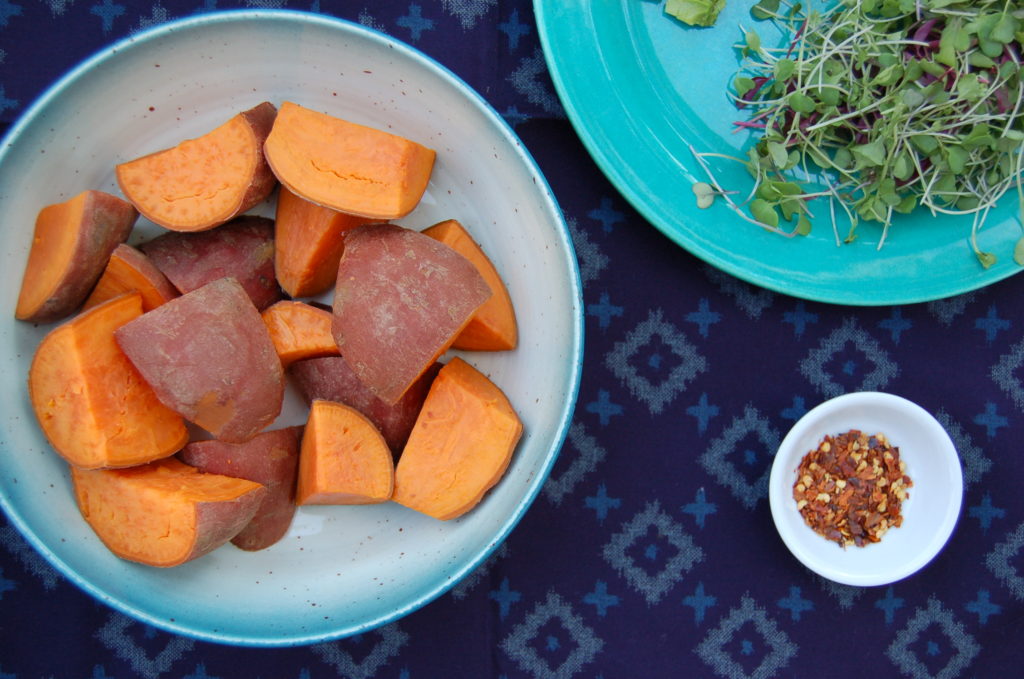 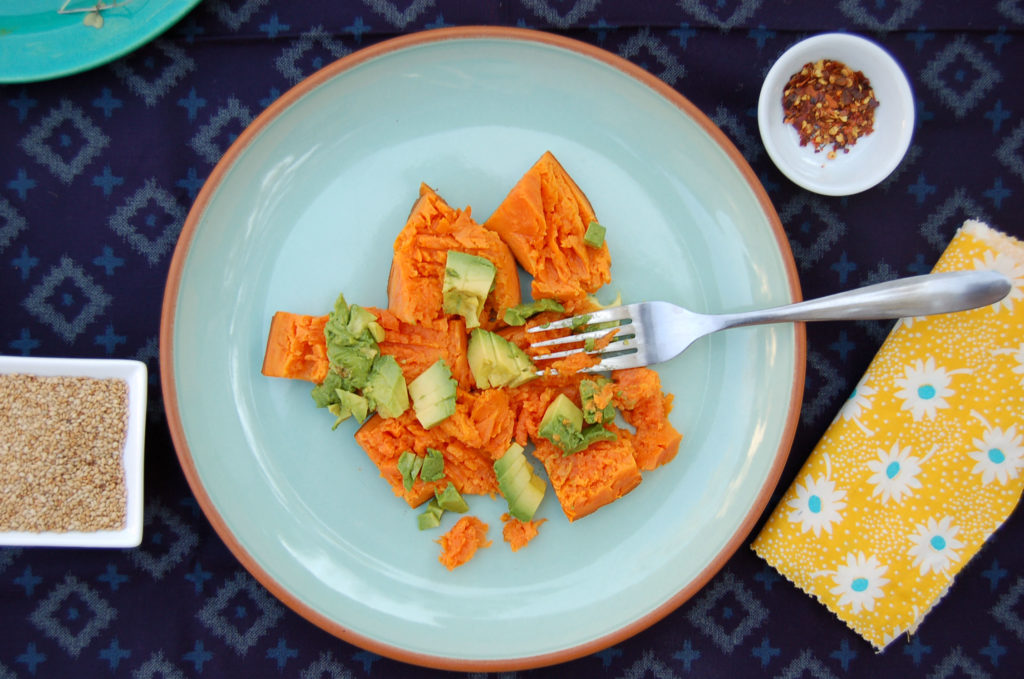 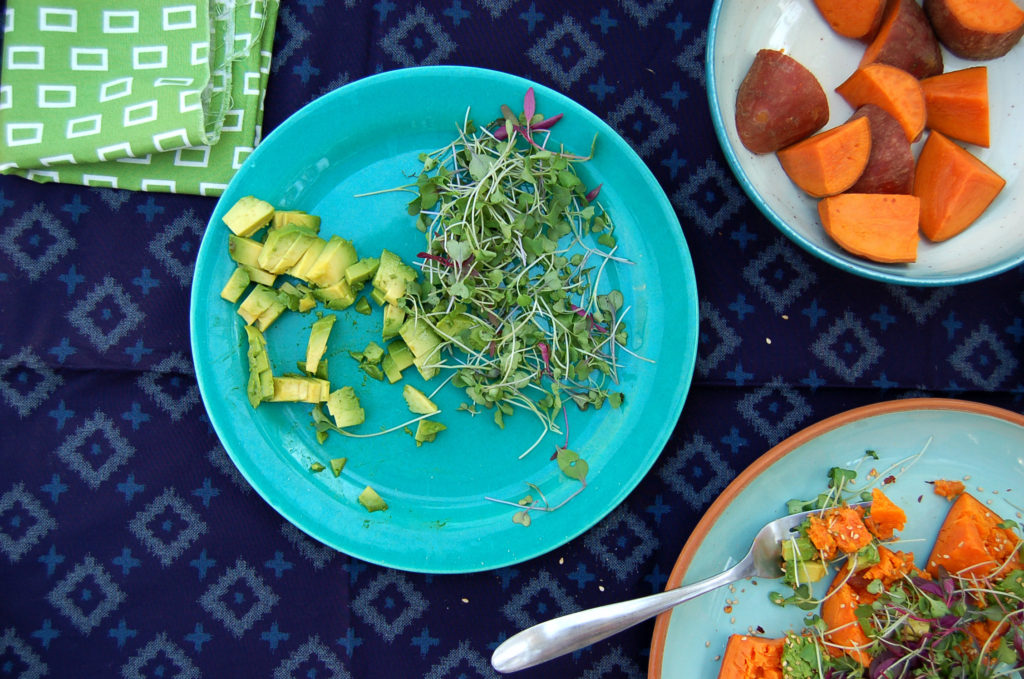 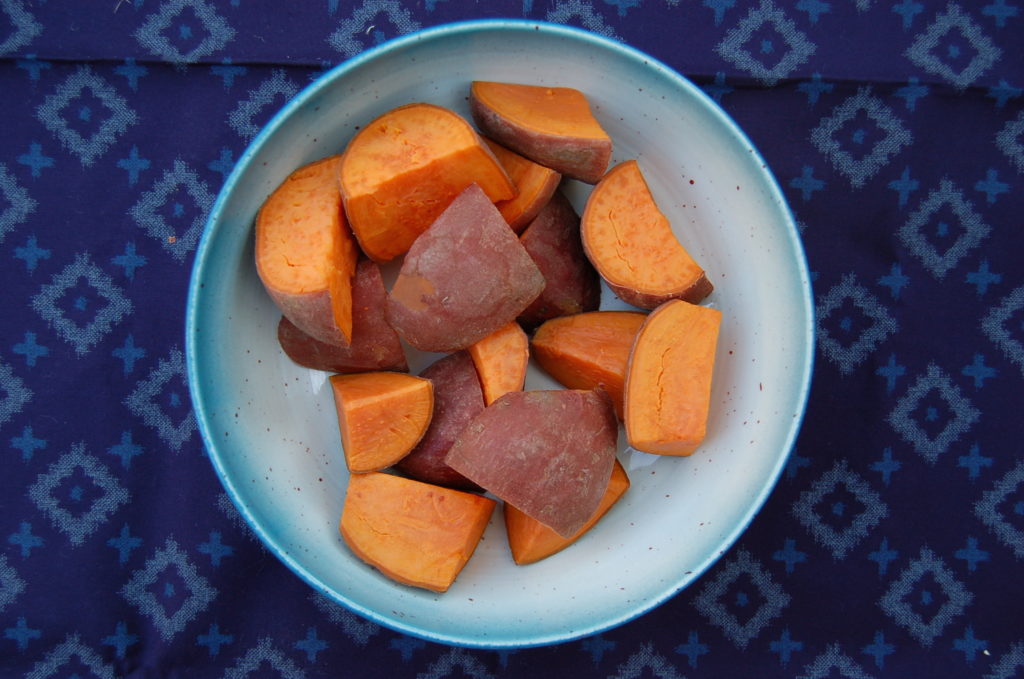 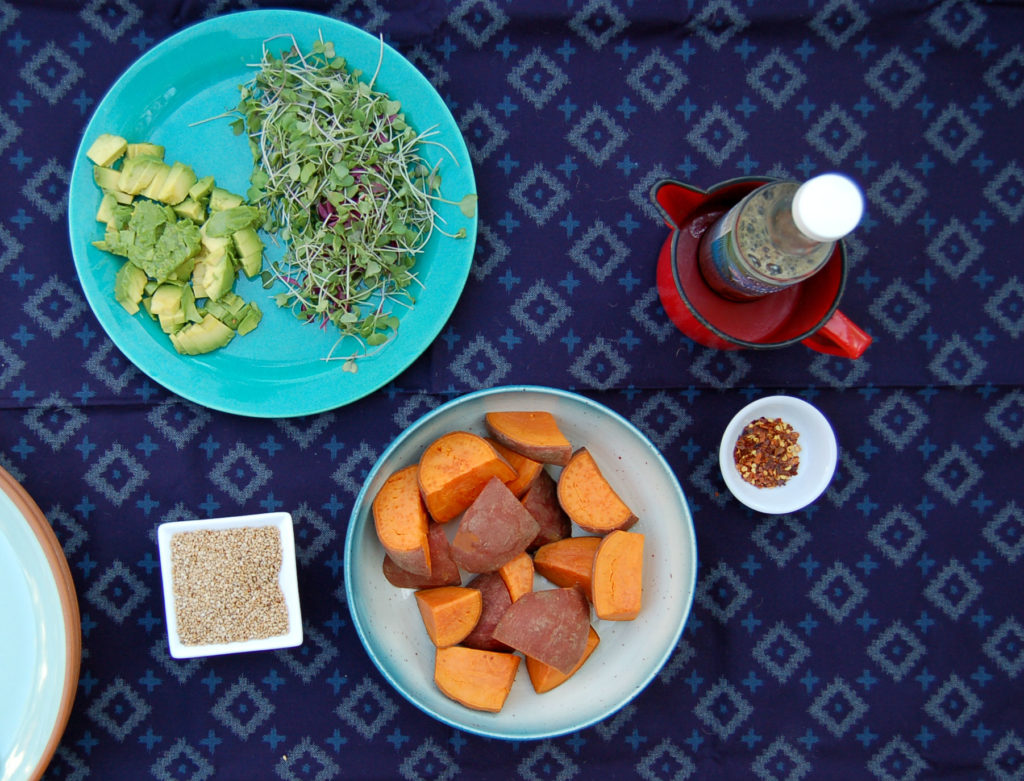 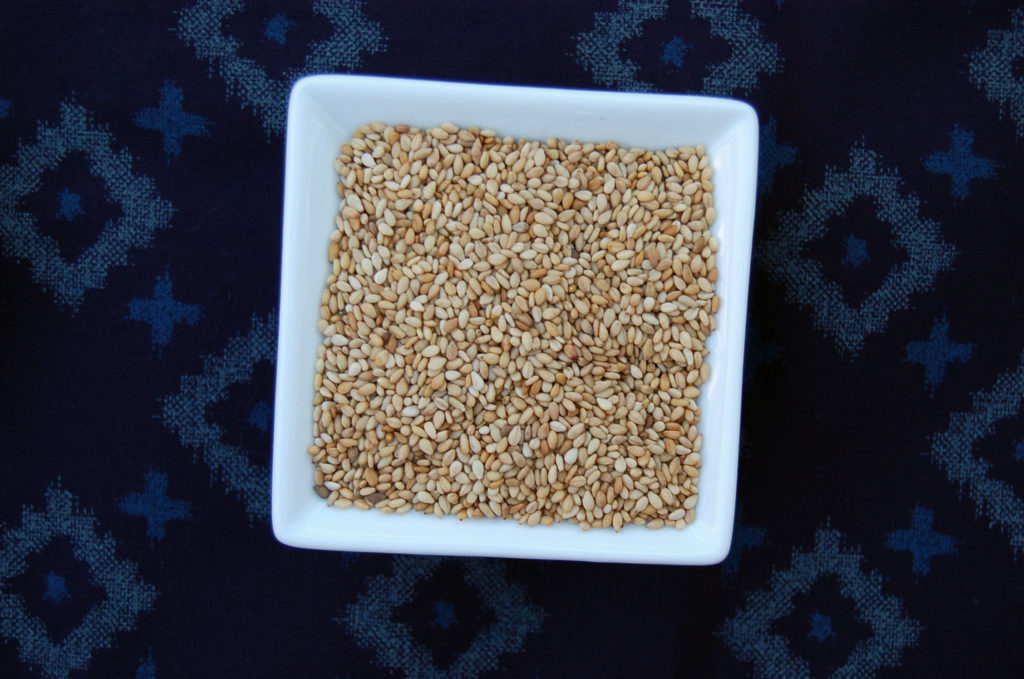 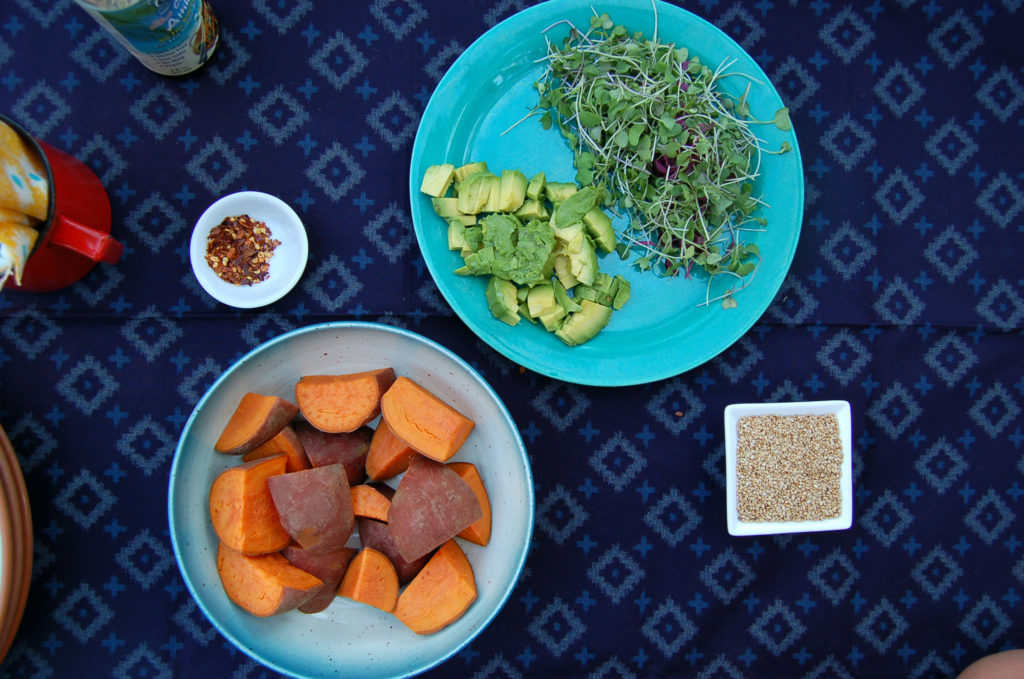 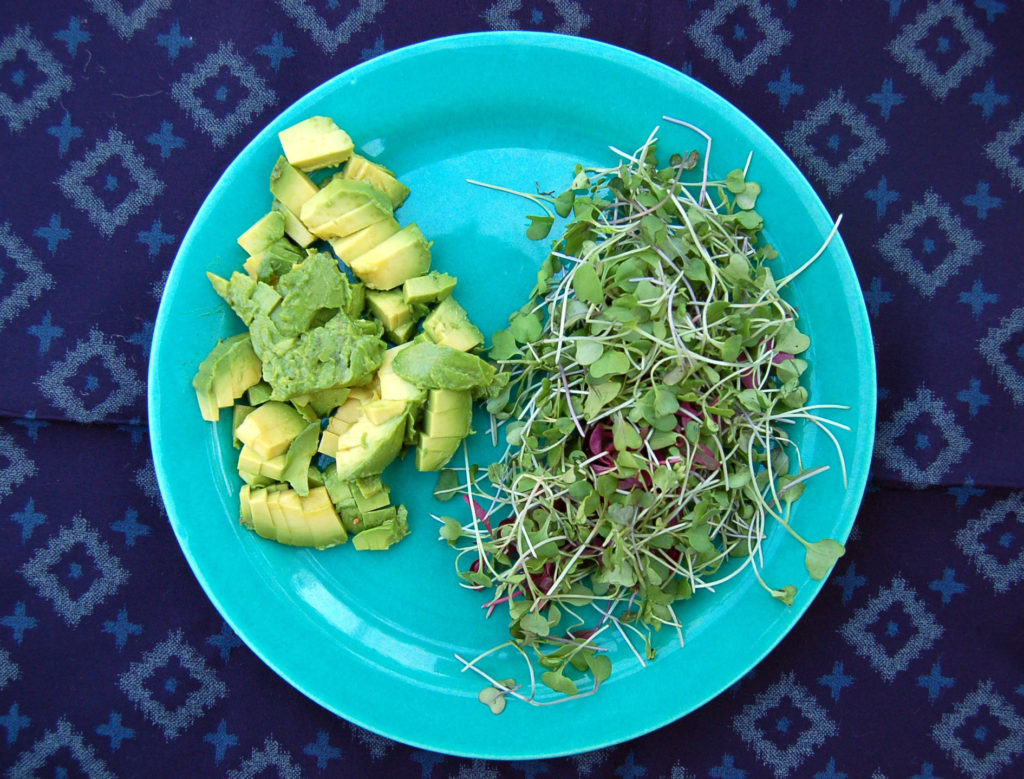 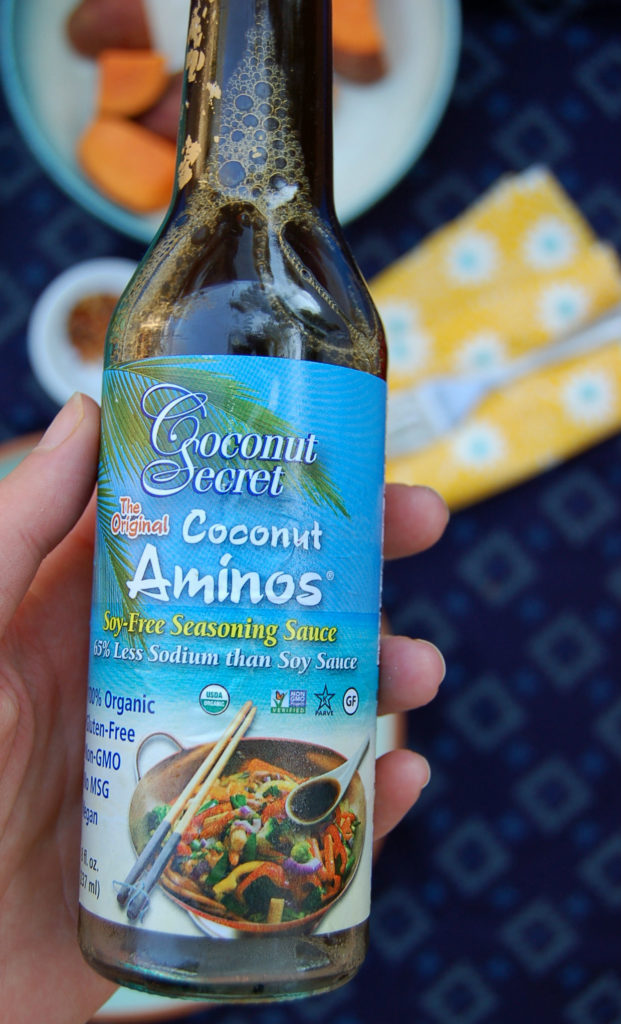 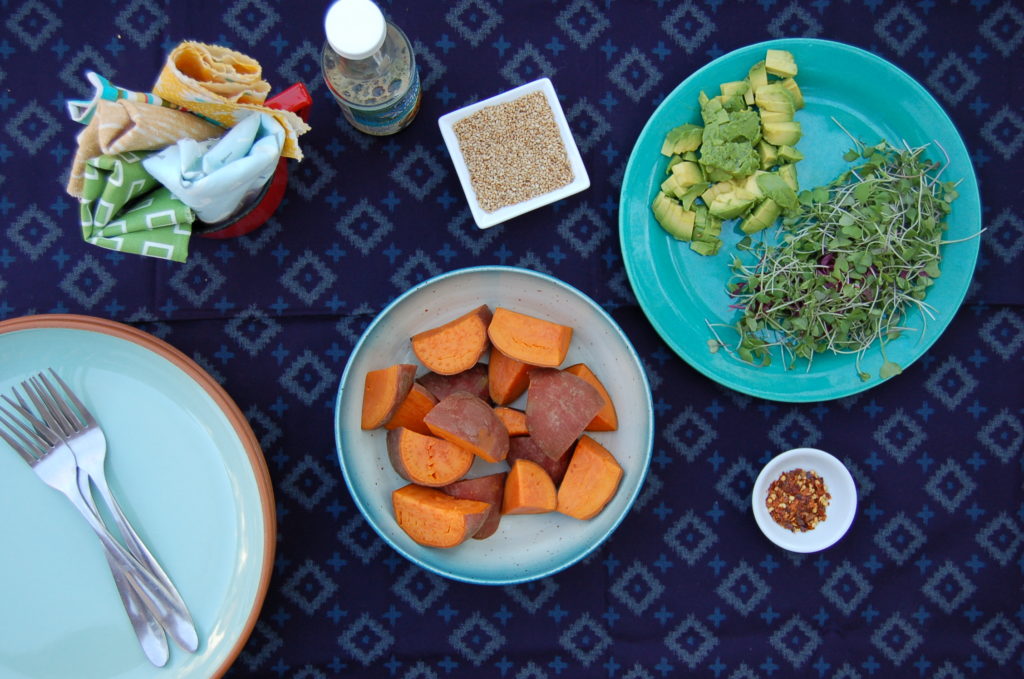 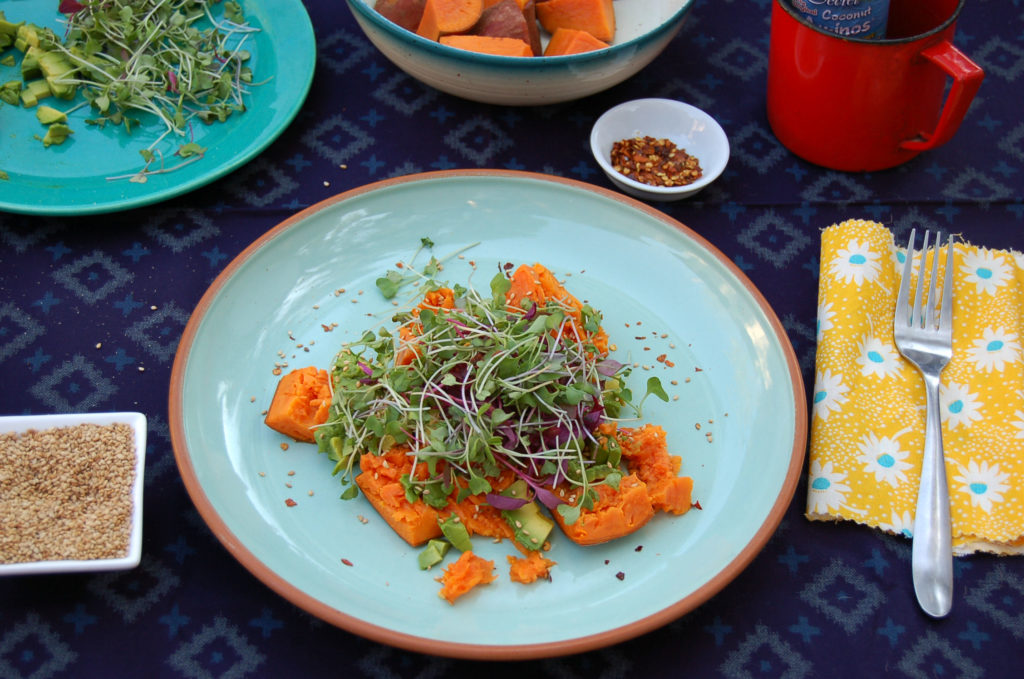 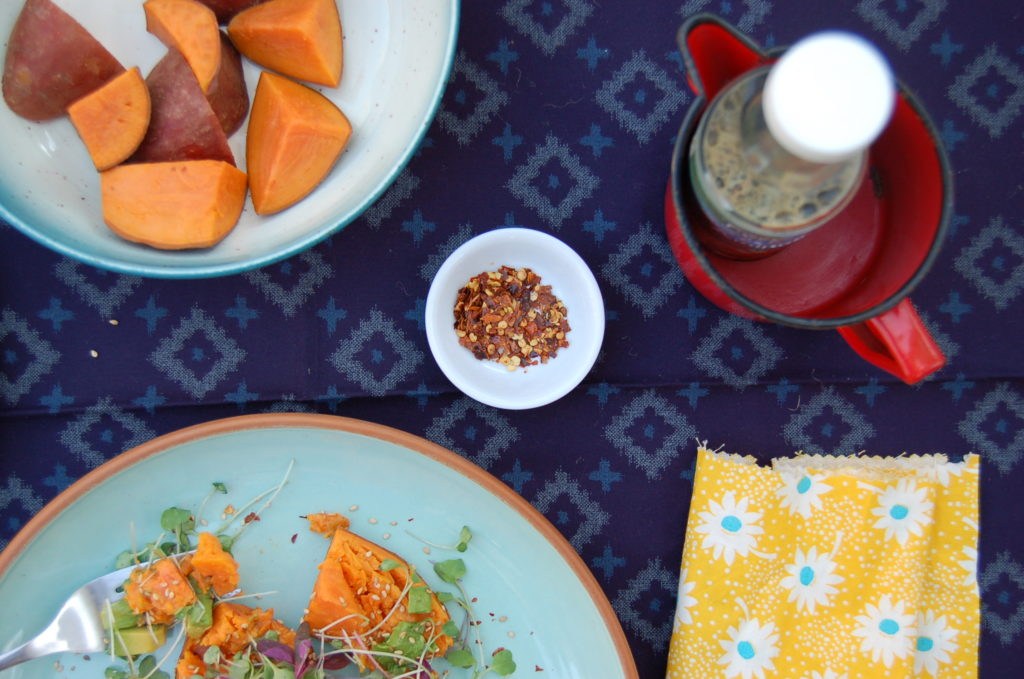 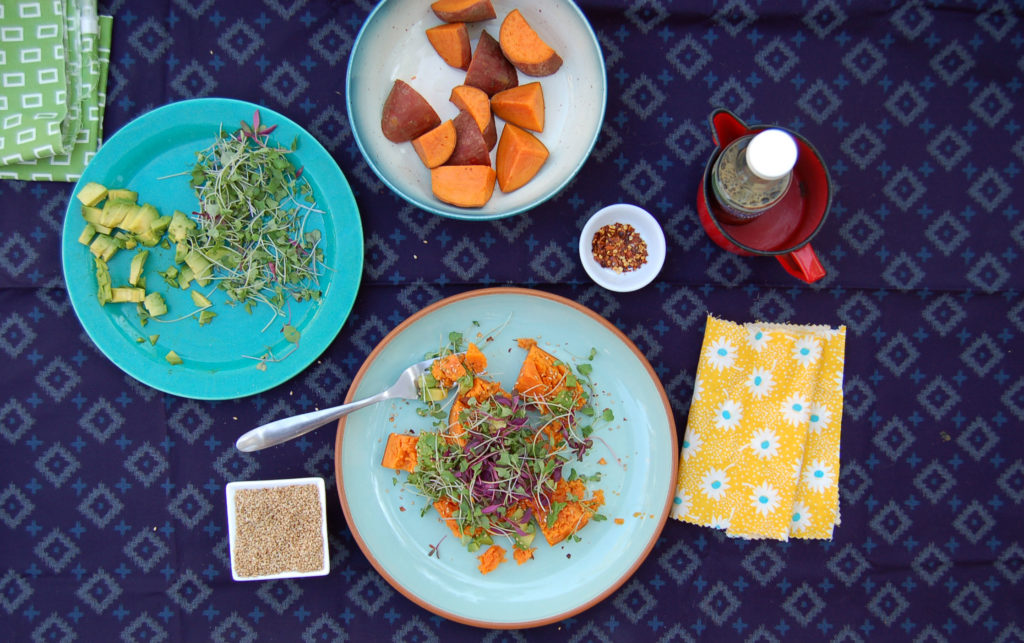 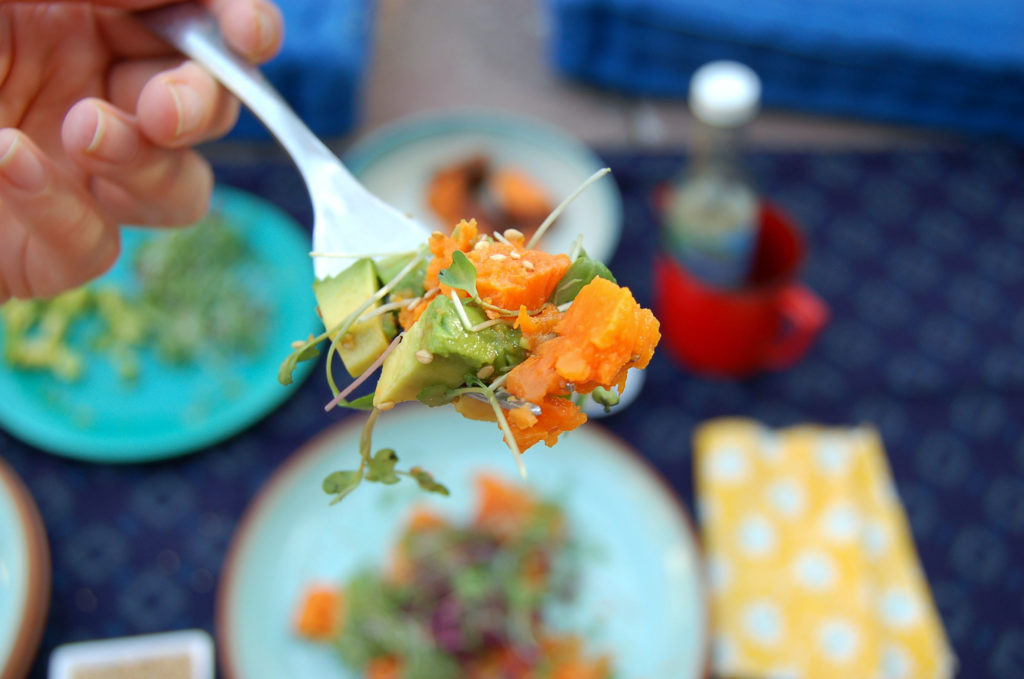 I hope that you have a happy week. May it be filled with life changing decisions and lots of wedding invitations. 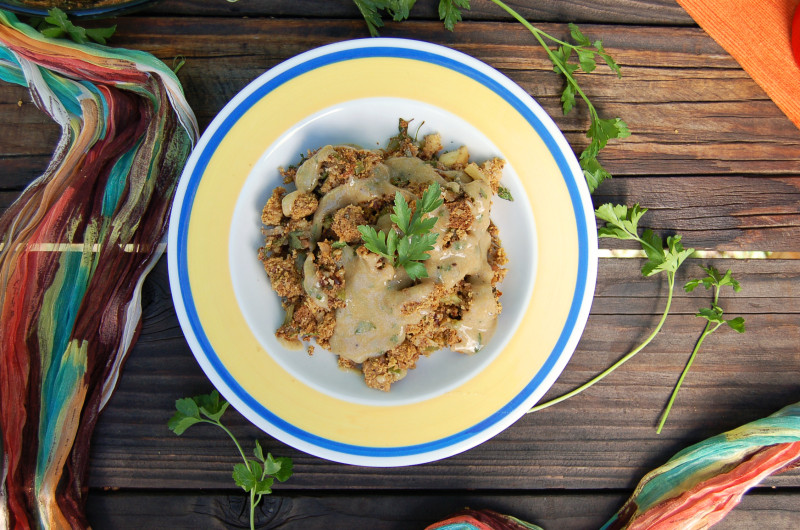 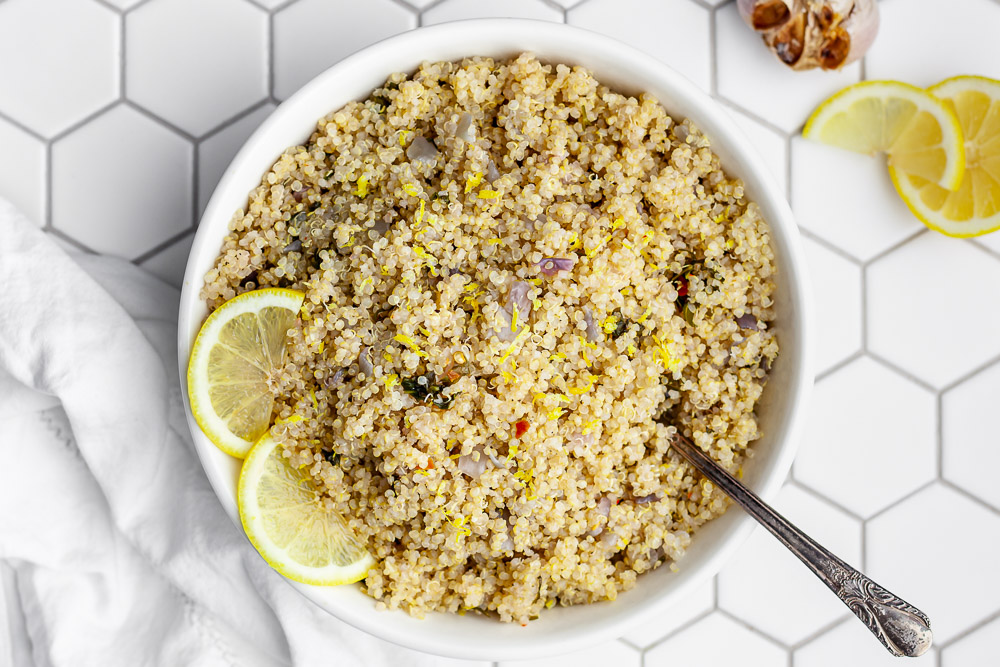 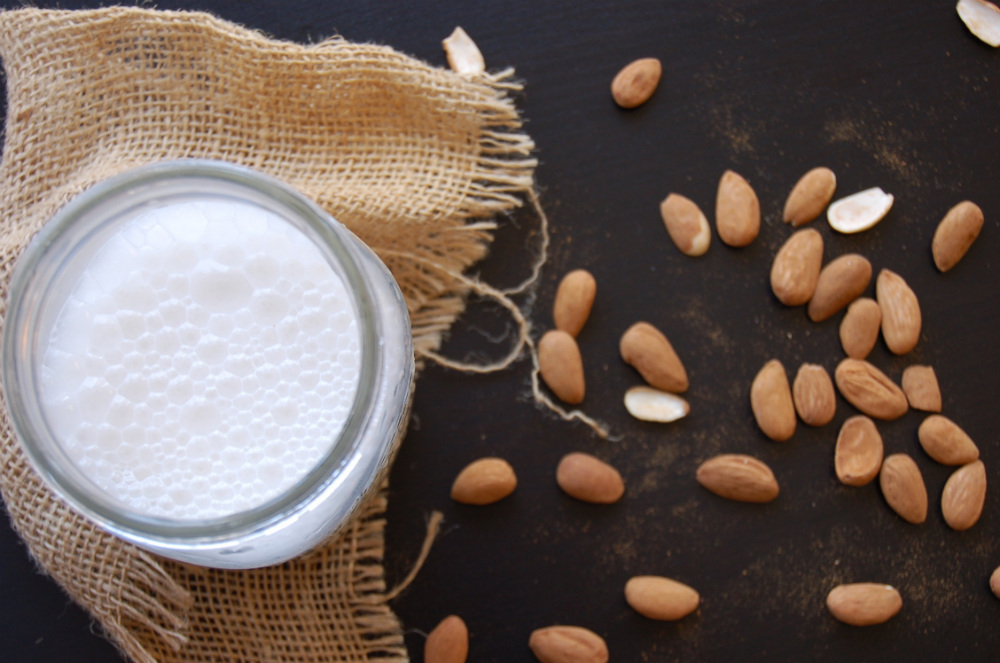 How To Milk An Almond (Or, I Want To Be Friends With People Who Have Dream Catchers)