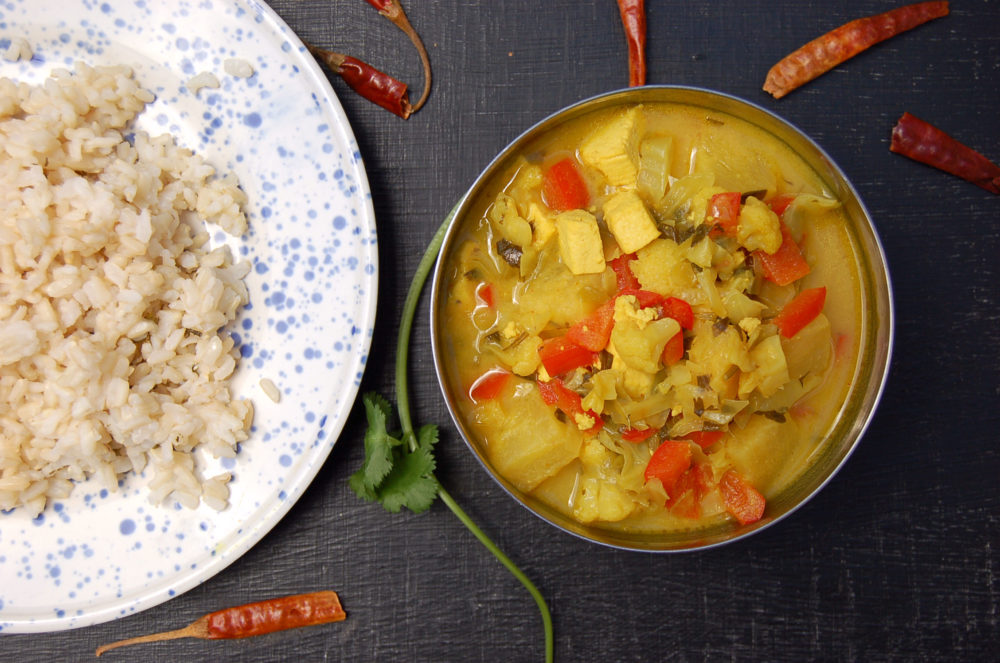 Have you ever been in a situation where from your perspective something bad was happening but you had to pretend that everything was hunky fucking dory so you didn’t come off as a total asshole?

I’ve had a few of those, but there’s one in particular that I want to share with you today.

It was my first time visiting Hong Kong and my girlfriend and I were staying in the super local neighborhood of Kowloon. “Local” meaning everything is written in Chinese and you will not spot a tourist. Ever.

Kowloon is also one of the most densely populated areas on the planet, and the place we were staying was testament to that. Our room was on the 17th floor and it wasn’t much bigger than a two person REI tent.

As soon as we saw our digs, I was thankful that I could comfortably fart in front of Luanne. These were close quarters, bodily functions had no place to hide.

Every window in the building had bars covering them and the whole place was dark with the exception of intermittent bursts of fluorescent lights, reminding me that I was in the real life version of Saw.

The elevator was tiny (even by Asian standards). It was dark, rickety and it reminded me of a snail. It would start off really slow then it would stop and drop ever so slightly. Just as my palms started to sweat and my heart began to race, it would slowly start up again, stop and drop a little more. This adventure happened over and over for 17 floors worth of fun.

After our first “successful” elevator ride to our floor, I decided that I would be taking the stairs from then on. This way I could tone my ass and escape death by elevator. I started my search for the staircase, but after 15 minutes I accepted that my search was in vain because this building clearly thought stairs were for pussies.

It was elevator or bust.

As I walked back to our hobbit room, the thought of a fire entered my mind, and I had to consciously think about a litter of newborn kittens in order to not go into a full blown panic attack.

It was our third day in Kowloon. We were still alive and we had made it up and down from our room at least 6 times. Each time, I thought of a new batch of kittens. I also thought of a pygmy goat, my niece when she was a baby, an elephant playing in water, a baby bunny wearing a backpack, my cat Panda and this baby. My cute thoughts worked because I never once had a panic attack.

So things were going pretty well, but one of the challenges about having an extreme language barrier with no translator is finding food. Some restaurants had a couple of pictures of dishes haphazardly taped to the wall, but for the most part, we had to look at what other people were eating in each restaurant, and point to what looked good. I usually pointed to noodles and hoped for the best.

So we were stoked when a good friend of ours arranged for her parents and us to meet for lunch. They were from Hong Kong and they even spoke a little English. Bonus!

We met my friend’s parents in the heart of Kowloon outside of the Dim Sum restaurant where we would be having lunch. Two things happened upon shaking their hands:

As we made our way to the restaurant, I was feeling pretty good about things and thoroughly enjoying my Anthony Bourdain experience.

When we entered the restaurant, I felt every single eyeball in the room land on me, and the room fell silent. The looks I was getting weren’t hostile, they were looks of pure shock and confusion. I quickly gathered that people with blonde hair and blue eyes didn’t frequently dine at this particular restaurant.

We took a seat at a huge round table with a lazy susan in the middle. There were opulent gold chandeliers hanging above each table and nearly every seat in the restaurant was taken. The room had several TVs mounted on each wall with local Soap Operas playing and no sound. The room was freezing cold and as I looked around at the amount of food on each table, I realized we were going to be there for a while.

Our waitress was prompt to get to our table and the mom took charge and started ordering right away. The ordering process appeared to be more of an argument than a lunch order.

At one point I thought things might get physical. There were lots of hand gestures, talking at the same time, shouting and shaking of heads. My concern grew with each octave, but no one looked concerned, so I followed suit and tried to look normal (which usually ends up looking like I’m constipated).

The first dish that arrived was ordered special, just for me. It was called “Mango Salad” and both parents were excited for me to try it. Since there was no other food yet on our table to distract the kind couple, all eyes were on me and my dish.

From the outside, my “Mango Salad” looked like three harmless egg rolls. Which, looking back, should’ve been my first clue. If it’s called a salad and looks nothing like a salad, it’s probably not a salad.

I picked up one of the rolls with my hands, just like I would an egg roll and I put it into my mouth. As I bit into it, there was a familiar crunch and directly after that, hot mayonnaise exploded into my mouth.

Fuck. This was happening.

The mayonnaise was not only a complete shock to my palate, it was also hot as hell so it immediately burned the roof of my mouth. With all eyes on me, I did my absolute best to smile and give an mmmm and a head nod. After that, the conversation resumed and I was able to reach for my water and wash it down without blowing my cover.

As soon as mmmm came out of my mouth I knew that pretending to like my dish was a bad call. And just as I suspected, two more rounds of “mango salad” appeared throughout the course of our two hour lunch – just for me.

I kept eating my hot mayonnaise pockets, gag reflexes going strong with each bite. At one point I wondered where the fuck the mango part of the dish escaped to. Not that it would have made any difference, I was just trying to wrap my head around it. Because what the fuck kind of dish was this?

If I were dining in let’s say, Milwaukee, I wouldn’t have been so shocked, but I was in the Dim Sum capital of the world.

It defied all logic.

I can confidently say that it was one of the worst things I’ve ever had in my mouth, but I didn’t want to be an asshole, so I sucked it up and continued to shovel hot mayo into my mouth.

So here’s the thing I’ve learned about salads in Asia. They don’t exist. I now know that when the word “salad” appears on a menu, it’s code for mayonnaise. I guess the logic looks something like this: mayonnaise is sort of like dressing and dressing goes on salads.

So here’s the plan – I’m going to get to work on my “things to accomplish” list, and you get to work on this recipe. It’s delicious – the exact opposite of “Mango Salad”.

Rich Pineapple Curry (Lemak Nenas for my Malaysians in the house) 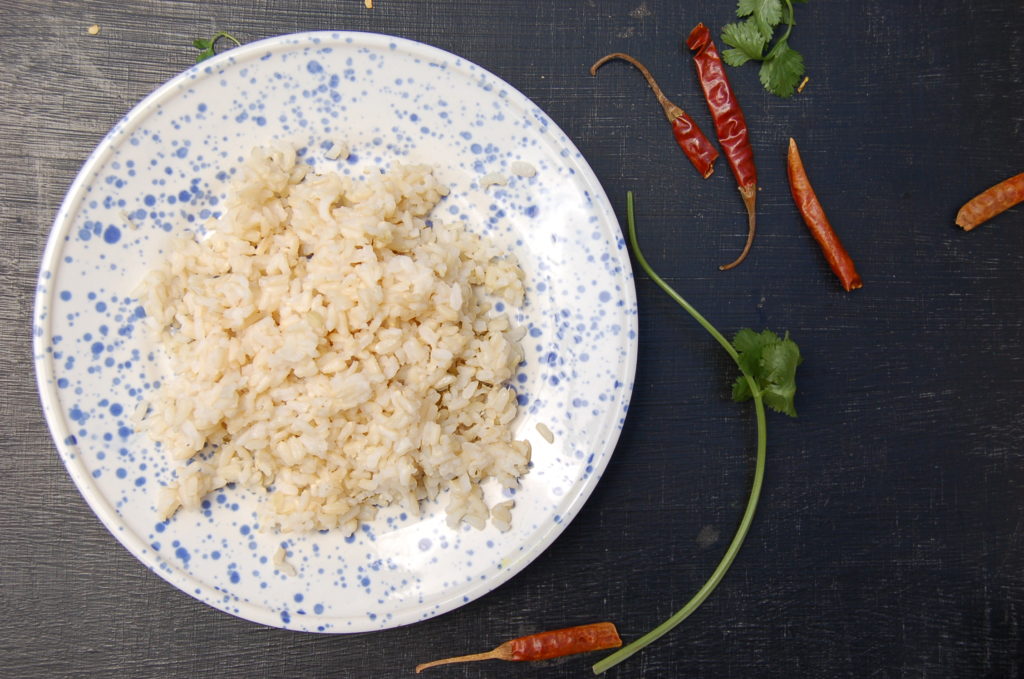 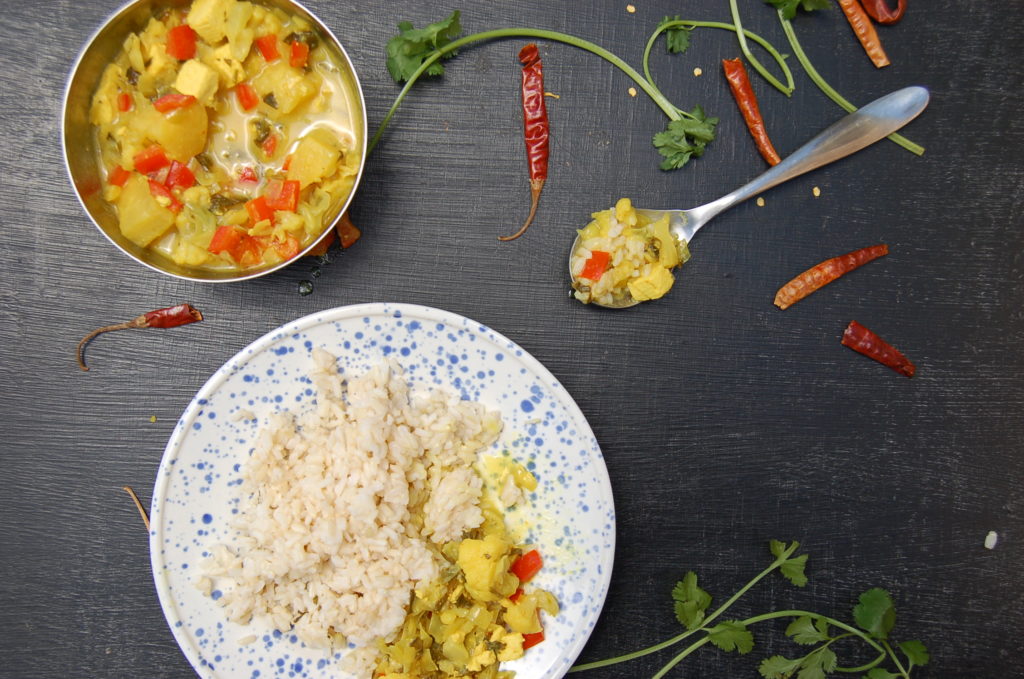 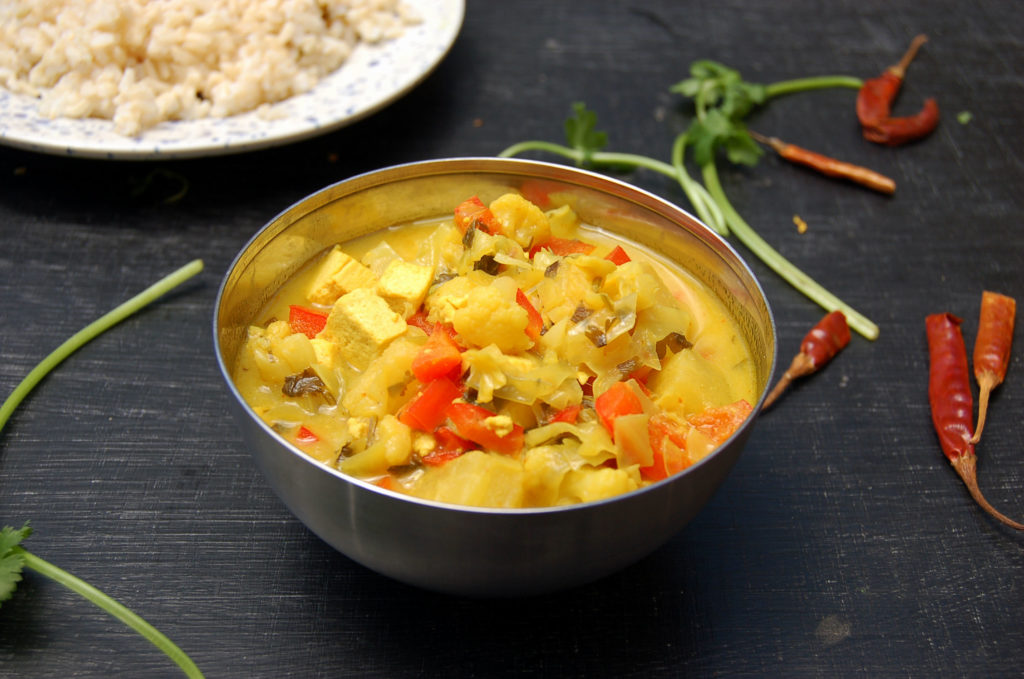 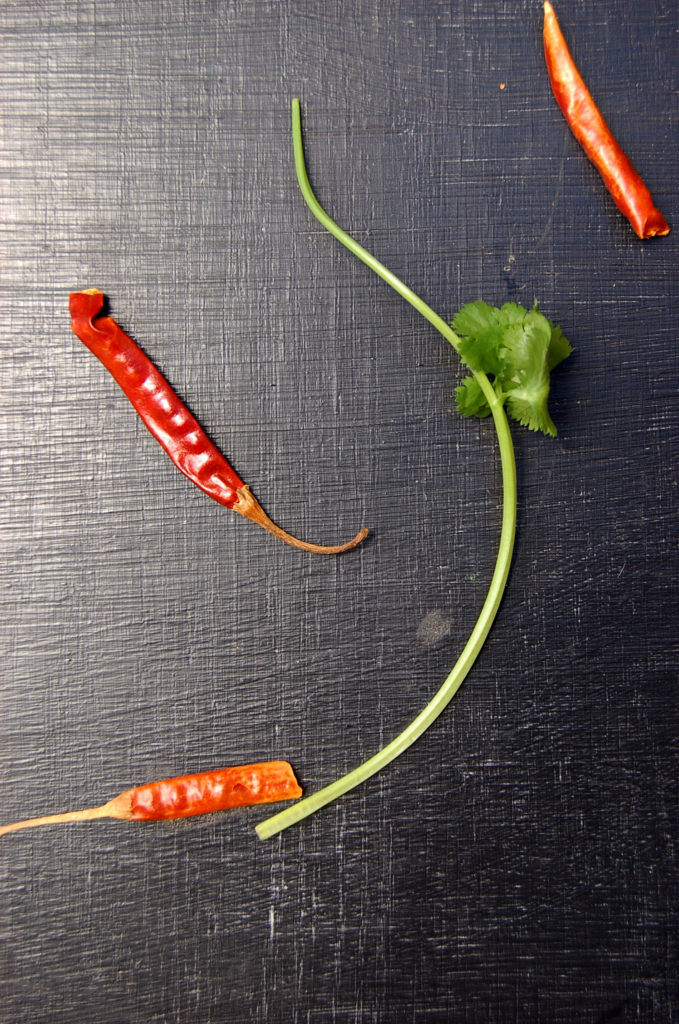 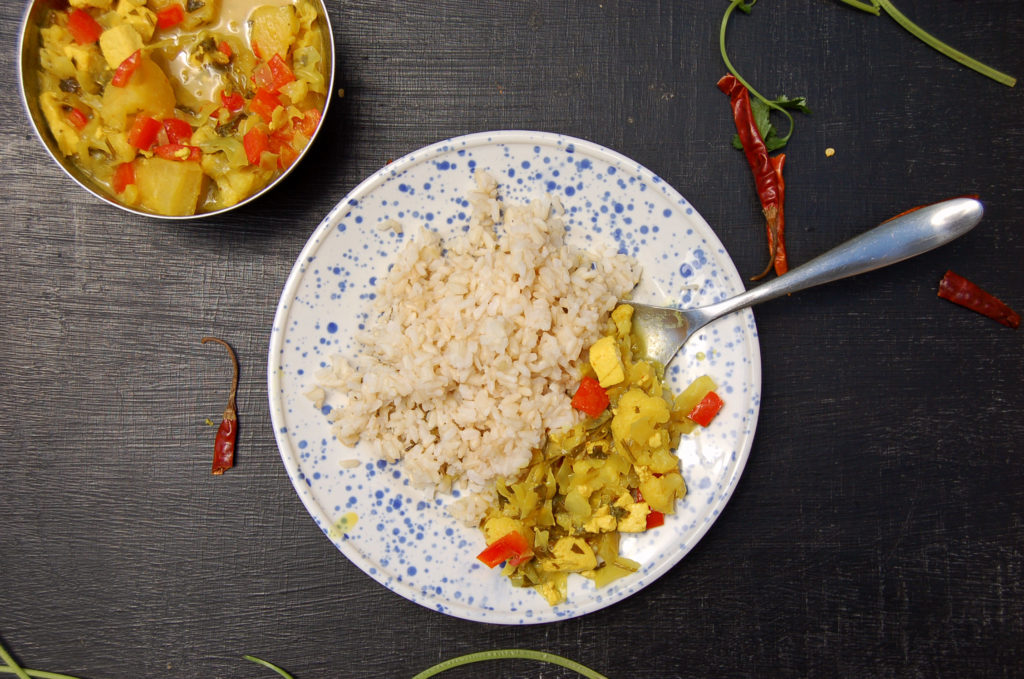 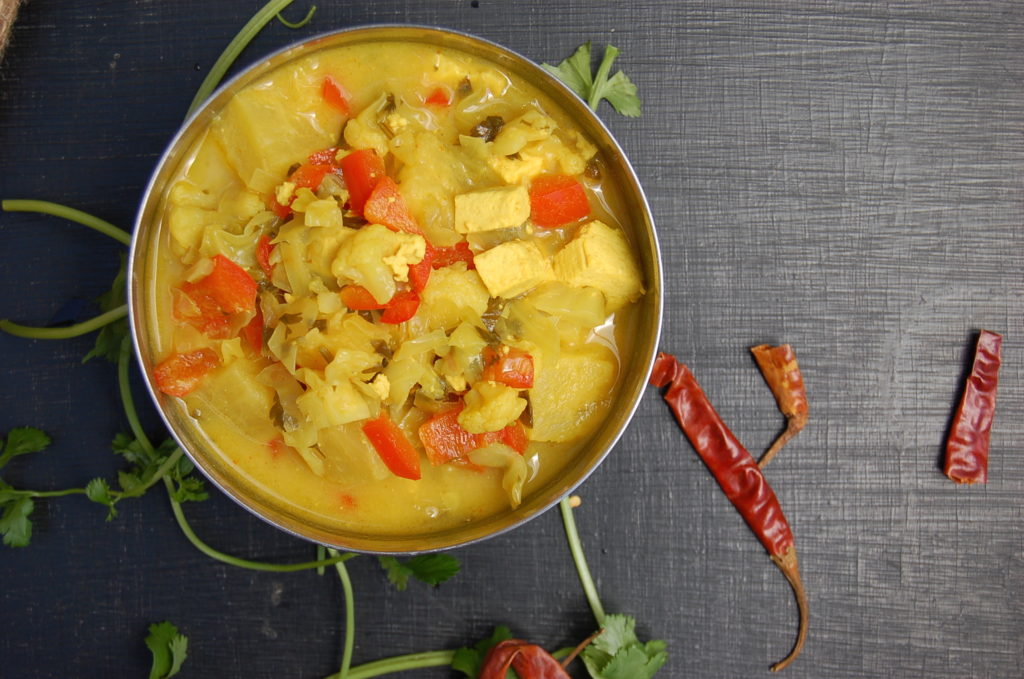 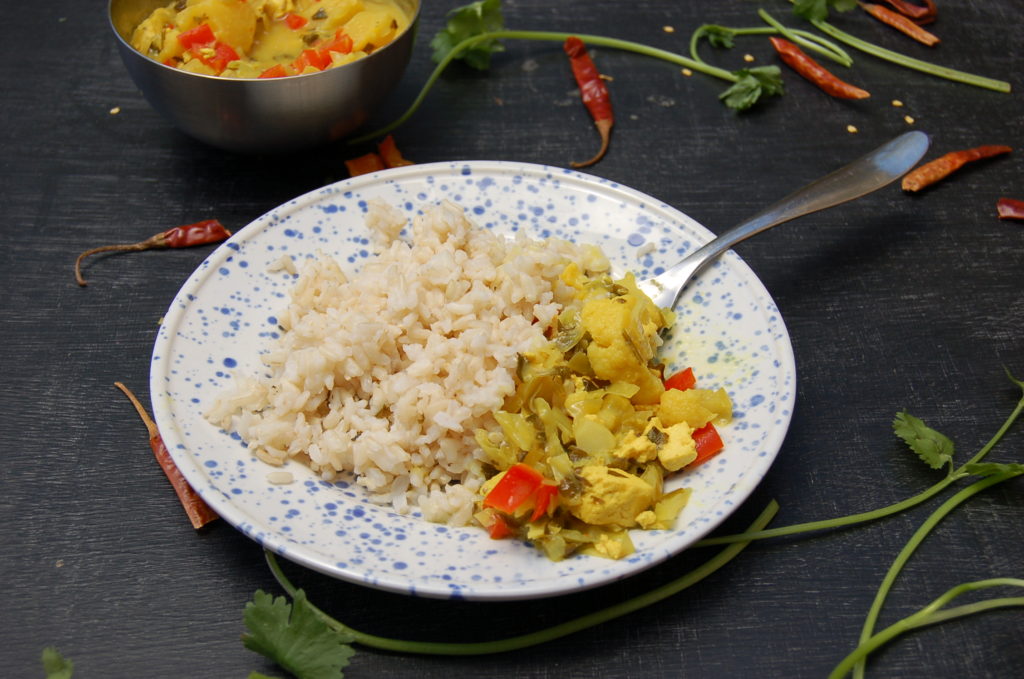 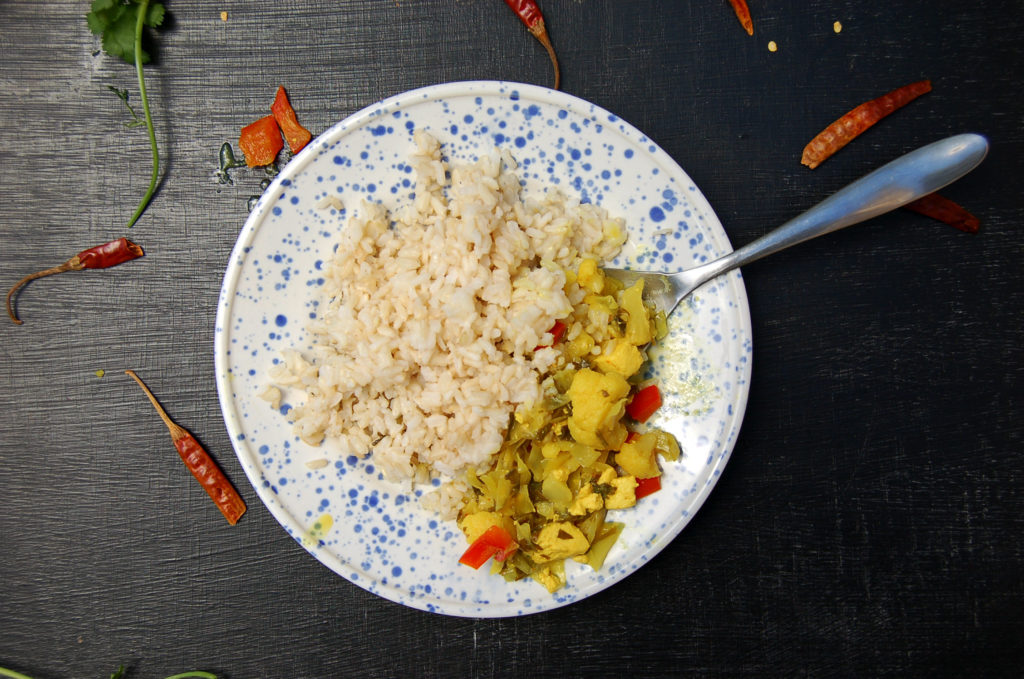 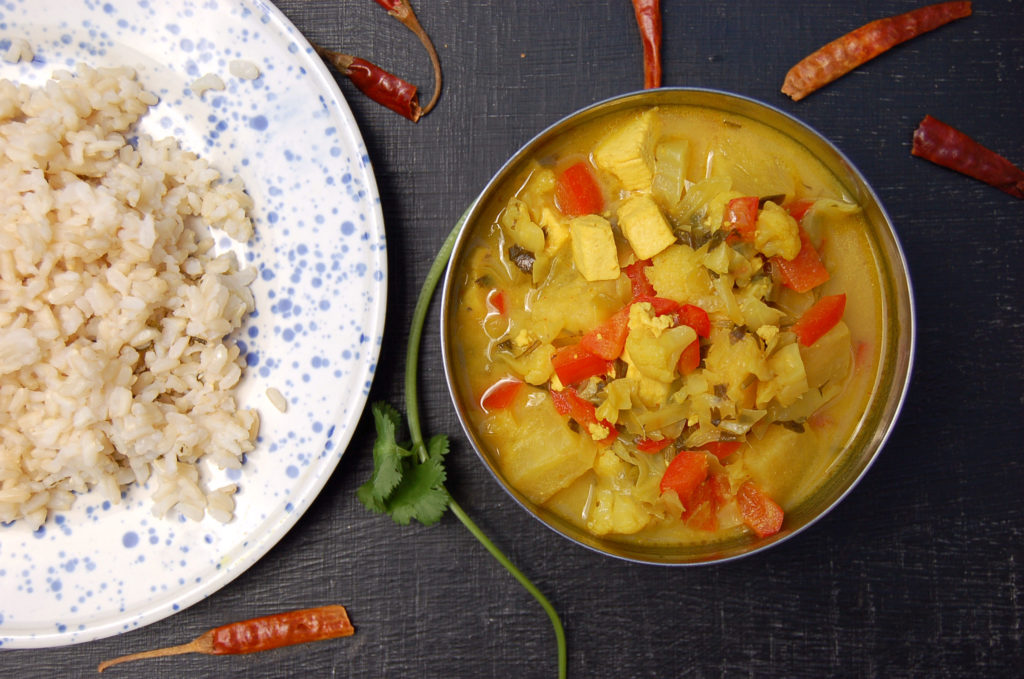 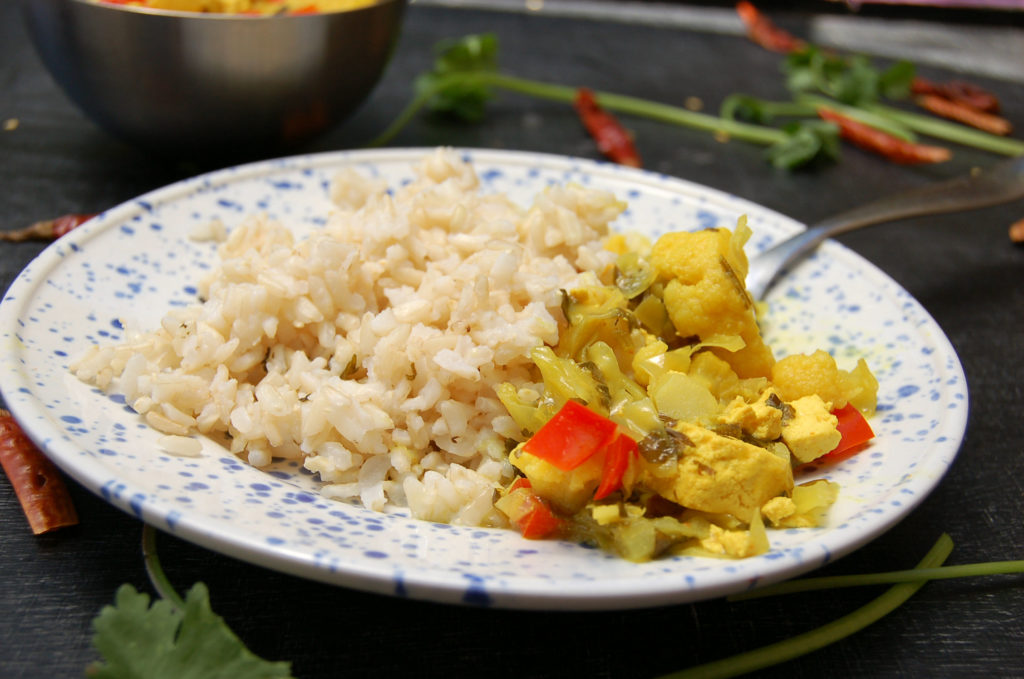 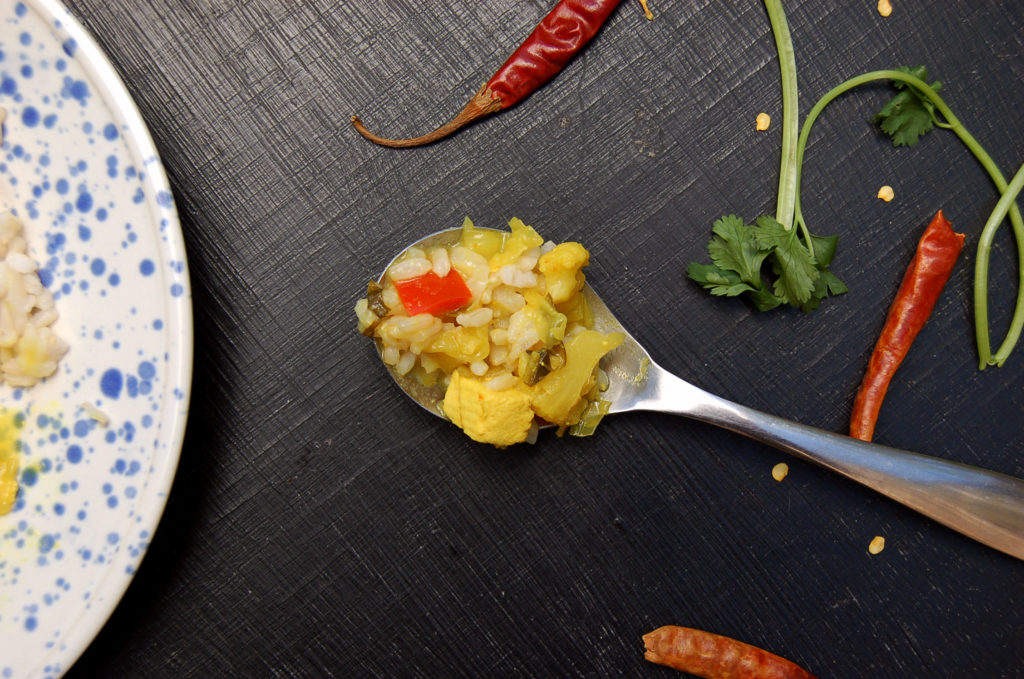 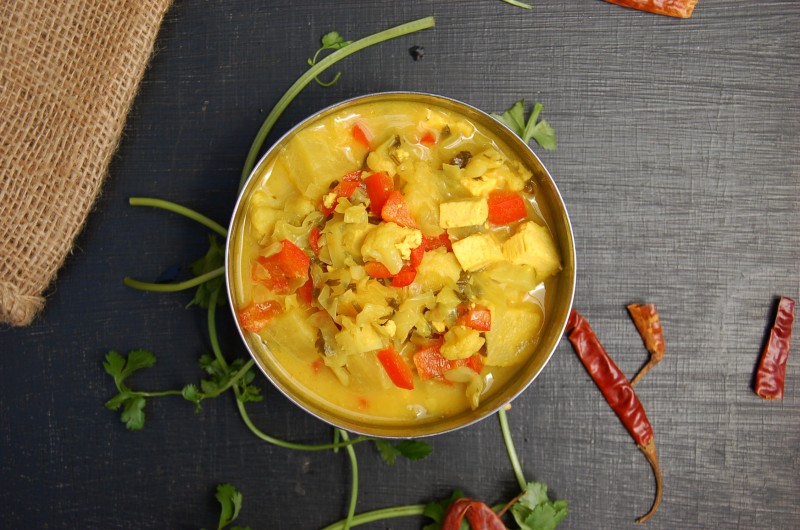 I hope you have a happy week. May it be filled with authenticity, even when it’s embarrassing. 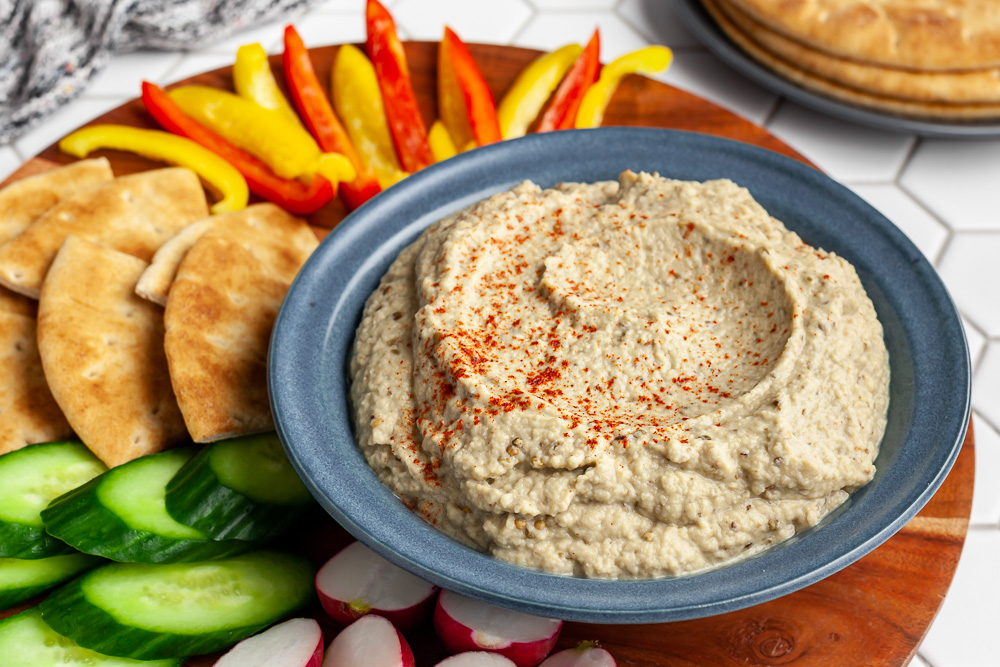 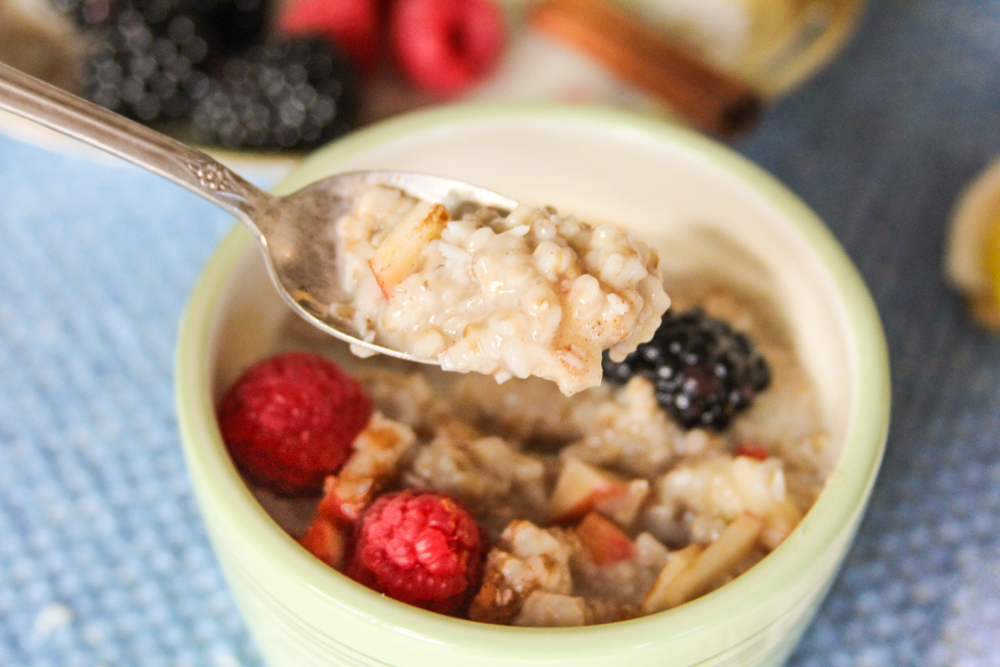 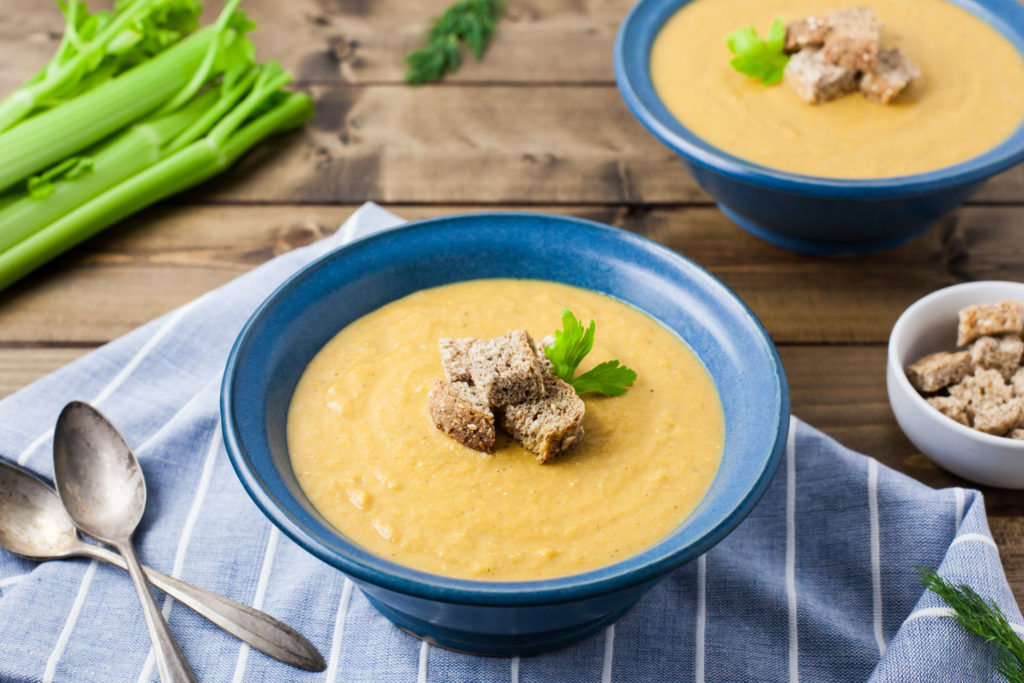