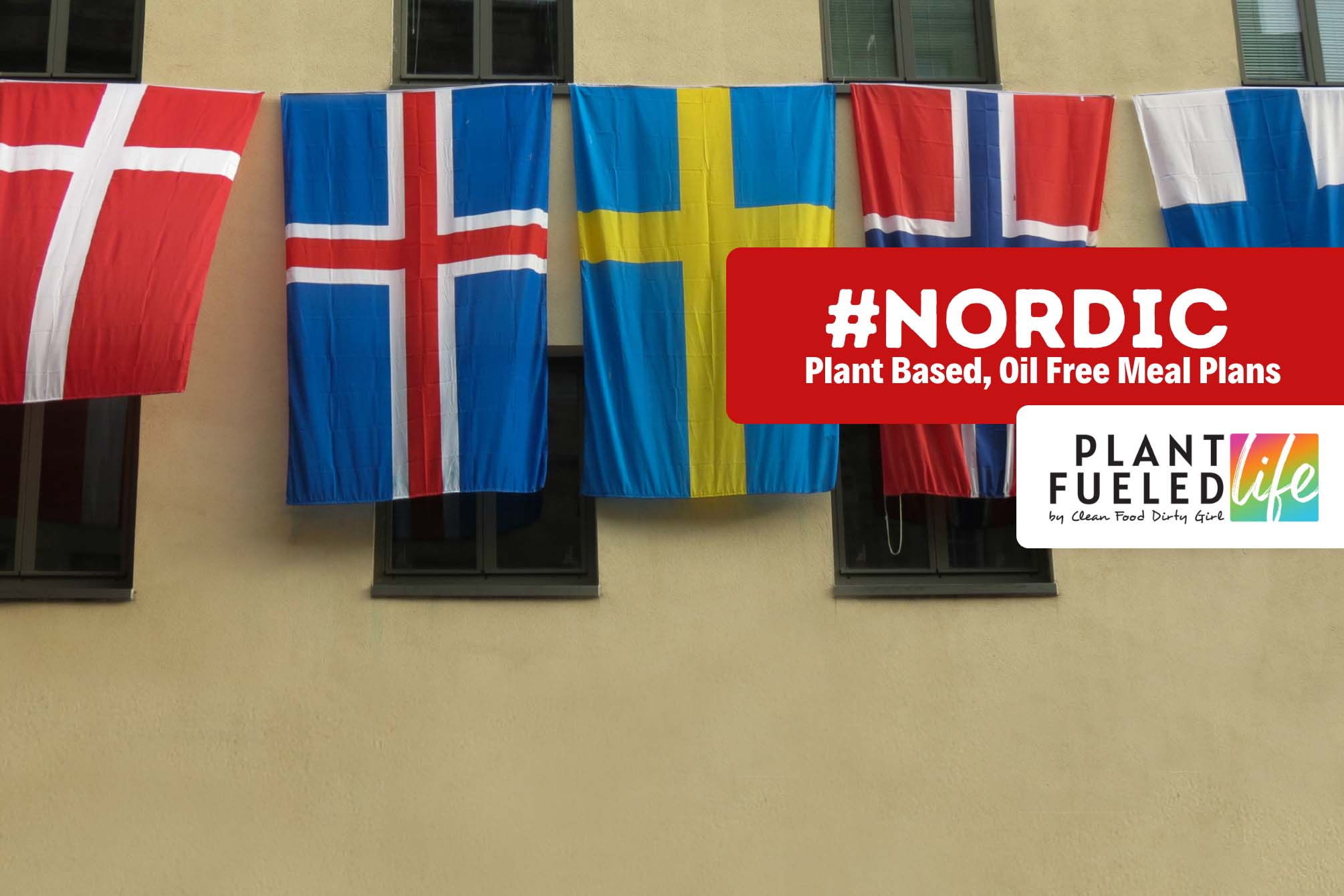 Take your taste buds on a #Nordic adventure! A bold plant based meal plan from Wizard Jen that will have you traveling through Denmark, Finland, Iceland, Norway, and Sweden where you’ll find tradition-inspired dishes done in deliciously Dirty style.

Chazz, our wonderful meal plan tester, was able to knock this Gourmet plan batch out in 2½ hours. She’s an expert batcher who has refined her kitchen mojo. If your batching time is longer, that’s A-ok! Practice is the key to refine your own batching process.

Let’s learn a bit about the history of this week’s Nordic plant based menu:

Finnish Meatballs (Lihapullat) and Boiled Herb Potatoes with Savory Cream Sauce
You may associate meatballs with the Swedish, but the Finns love them, too! They’re traditionally eaten at celebrations like Christmas.

Potatoes were introduced to European diets after Europeans began traveling to the Americas, and they quickly became a darling drop of colder climates. You’ll find them to be an important part of traditional cuisines throughout the Nordic region.

Danish Open-faced Sandwich (Smorrebrod) and Cucumber Salad (Agurkesalat)
Bread is a foundation of Danish cuisine, and Smorrebrod is nothing if not a celebration of bread, specifically dark bread like rye. These open-faced sandwiches are traditionally topped with anything from meats to cheese to veggies and pickles. Smorrebrod is so beloved by the Danes that poet Johan Herman Wessel wrote a classic poem about it.

Agurkesalat is a Danish cucumber salad where the cucumbers are quick-pickled. In general, pickling food has a long tradition in Denmark because it’s a reliable way to preserve food over harsh winters when fewer fresh options are available.

Caraway Cauliflower, Mushroom & Cabbage Skillet and Fresh Fruit
You’ll find many takes on hearty winter vegetables throughout the Nordic region. This dish is seasoned with Caraway, one of the most popular spices in the region. Its light anise flavor lends itself to the licorice-loving Nordic palette.

Swedish Yellow Pea Soup (Ärtsoppa) and Very Berry Jam Crostini
This yellow pea soup is a Swedish classic rumored to have been around since the Middle Ages. And it wouldn’t be a Nordic plan without a berry jam. Berry jam, traditionally made with lingonberries, accompanies almost every type of dish in Sweden, both for a sweet kick, and also to complement other flavors.

Norwegian Raw Food Salad (Råkostsalat) & Aromatic Herb Quinoa Bowl
Råkostsalat literally translates to raw food salad and is a Norwegian vegetable-based dish either served with fish or eaten on its own for its nutritional properties. The dish varies widely based on where and when it’s made since it’s a great way to feature local and seasonal produce.

If you’ve ever found yourself wanting a quicker batch day, wanting simpler meals with fewer sides and extras throughout the week, or generally wanting to spend less time in your kitchen, we have you swaddled up and taken care of!

Our Simple Meal Plans are inspired by our Gourmet Meal Plans. They are quicker to batch. SimpleNordic is a delicious way to experience our Dirty take on Nordic cuisine without the time commitment. Both the Simple and the Gourmet plans are loaded up in the classroom waiting for you to cook and NOM!

P.S. Take a look at the subscriber’s love for happy healthy wins!

Here's what our members enjoy.