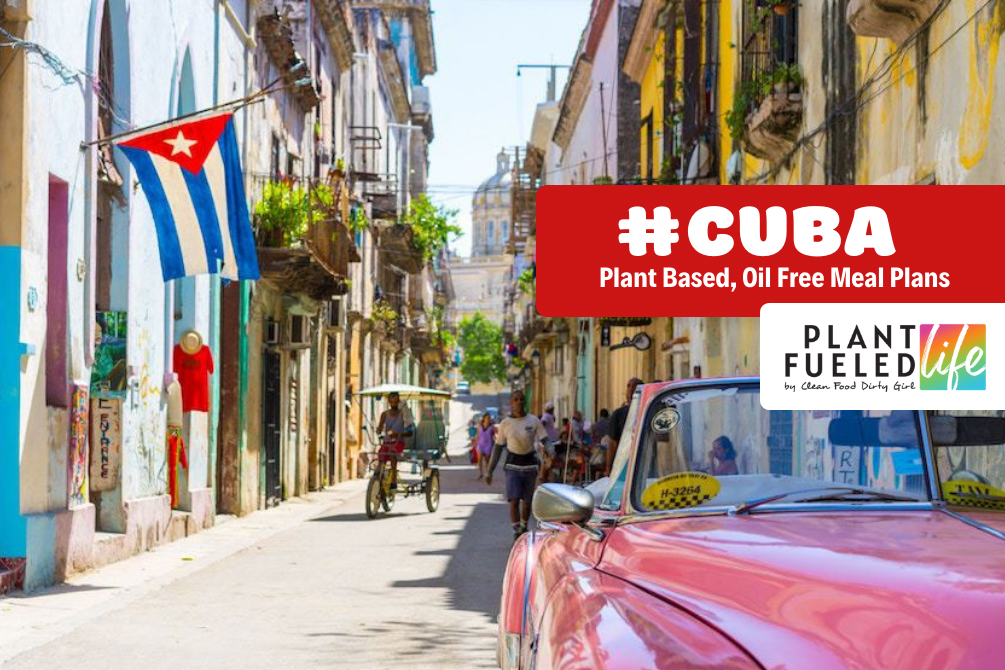 Cuba is a whole food plant based meal plan full of the colorful, savory, and sweet flavor profiles of Cuban food.

Cuban cuisine is a result of Cuba’s history, geography, and tropical climate

The first influences on Cuban food were the island’s original indigenous inhabitants, which included multiple cultures. The Taino people were the most numerous. They were accomplished farmers and anglers, and their diet consisted of mostly potatoes, yuca, fish, and fruit. These are still staples in Cuba’s diet.

After the Spanish stumbled upon the island while looking for new spice trade routes in the fifteenth century, they began establishing settlements to use as staging grounds for North American exploration. The Europeans brought their culinary traditions and spices from the far east with them.

Tragically, it’s estimated only ten percent of the Indigenous population of the Americas survived the next centuries of violence and disease. This near annihilation of Indigenous people is known as the Great Dying. It’s almost impossible to comprehend the scope of the Great Dying’s impact on Indigenous cultures, however, a small consolation is that some Native influence can still be felt in the food of particular places, such as Cuba.

Another strong influence on Cuban food is that of enslaved Africans brought to the island by Europeans. As in other parts of the Americas, enslaved people adapted the traditional flavors and techniques of their homelands to the ingredients available. Their creativity and ingenuity left an indelible mark on the cuisine. Cuba’s food has also been influenced by its Caribbean neighbors and by Chinese immigrants, with that influence being stronger in some areas than others, namely in Havana.

Cuban cuisine shouldn’t be enjoyed despite its bloody history, instead, it should be enjoyed in celebration of those who left their mark in defiance of tragedy and exploitation.

Celebrate with this plant based meal plan that features Cuban favorites like sofrito, picadillo, Cubanos, and curtido. The Shredded Jackfruit Cubano Sandwich with Curtido (Pickled Cabbage Slaw) is especially delicious and is sure to please omnivores and herbivores.

Decided to go back to the meal plan I started with, the one I fell in love with: Cuba. Still amazing!!!

The flavors of Cuba await. If you’re not a member, check out Plant Fueled Life to get instant access to hundreds of delectable meal plans and recipes free of meat, dairy, and oil.

We just finished Cuba. Every dish was delicious. 🤩 A favorite by far! It was the Cubano Sandwich that wooed me into wanting this plan and it did not disappoint. 👅

Simple Cuba is just as big on flavor as its Gourmet companion, with meals like Tacos de Picadillo and a Mushroom Cubano Sandwich, but with a shorter time commitment. Simple Cuba will help you get amazing Cuban food on your table fast.

Gluten-free meals in this plan include:

These meal plans are available to Plant Fueled Life members. Whether you’re curious about a whole food plant based diet or just drooling over the Cubano, these meals are a tropical party in your mouth!

Get instant access to hundreds of the most delicious meal plans and recipes when you join. Read why people love Plant Fueled Life and what incredible resources, like Group Coaching, are included.

Our meals plans are created by our in-house recipe developers and designed around batch cooking.

More of our plant based meal plans

Join Plant Fueled Life for meal plans like these