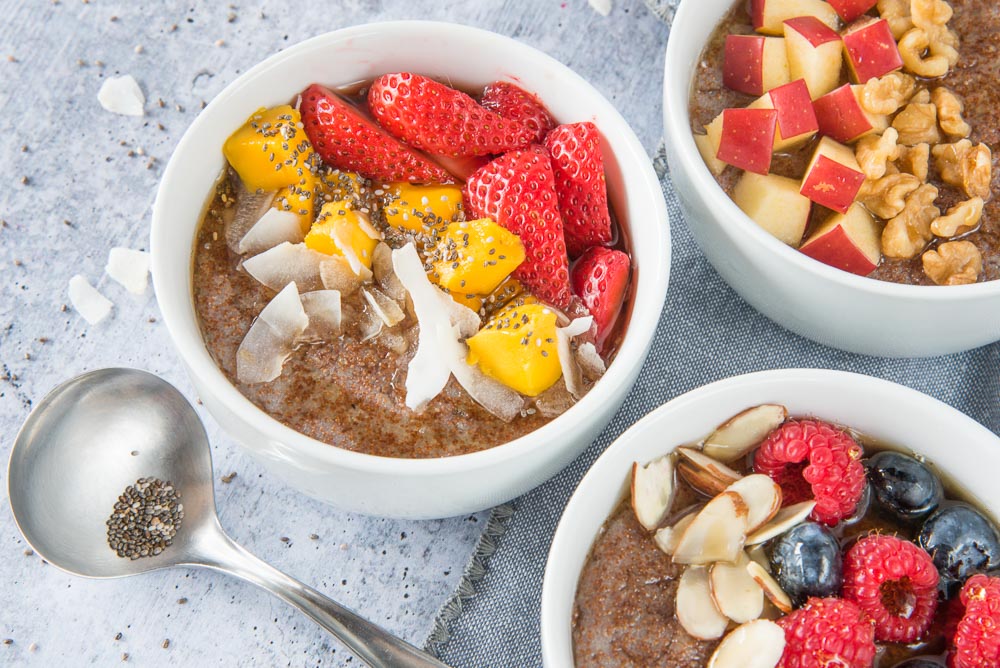 My beautiful love affair with coffee began at six months old when my mother put the creamy, sugary, caffeinated goodness in my baby bottle.

I was a colicky baby and screamed my head off nonstop from the moment I entered the world and throughout the first six months of my life. My mother, grandmother, and aunt took turns taking care of me so the others could sleep for a few hours and stave off total insanity.

Legend has it that one day while my mother was holding me and chugging her much needed cup of Joe, a few drops fell onto my face and slid into my mouth. Well, lo and behold, it startled me so much and shut me up just enough that my poor, haggard mother decided to let me suck a few more lukewarm drops off of her finger.

Now, this was the early 1970s and my mother was at her wit’s end, so I cannot really find fault with what happened next…

With subsequent formula feedings, she gave me half coffee in my bottle and everyone watched in sheer amazement as I miraculously quietened down and actually became a pleasant child. Thus life became much easier for everyone, or so the story goes.

Today, I believe that the caffeine in the coffee acted as a mild pain reliever and soothed my troubled little tummy, but who knows? It worked at the time and provided a little peace and quiet for my crazed family.

As a child, I was given a cup of coffee (mostly milk and sugar) every time the adults had coffee and that was usually multiple times a day. I learned early on where it was located in the grocery store, how to grind coffee beans, and at the age of eight I could brew a fabulous pot of coffee. We were a coffee swigging family, and by the time I was a teenager I was a full on coffee drinking fanatic!

When Starbucks was invented and came riding into town, I discovered that there really was a heaven on earth. I darkened that door at least once a day. Of course, that was in addition to the full pot of coffee that I’d already had in the morning and possibly the pot I would brew in the evening.

As the heat of summer sizzled the asphalt, I craved an Iced Caramel Frappuccino like a houseplant needs water. When the weather turned cooler, Pumpkin Spice Latte was my jam. Cinnamon Macchiato became my drug of choice during the holidays. And on a cold winter’s day? Nothing better than a coffee-laced Mexican Hot Chocolate. Occasionally, I even got a little wild and ordered a straight double espresso.

In the fall of 2014, I knew that I was overweight and undernourished. Something needed to change, so I went on a very restrictive low fat diet, started jogging, and gave up alcohol. I lost 113 pounds and was (I thought!) super healthy!

As was my habit, I started yo-yo dieting and gained back 55 pounds. My wife was also experiencing her own health issues with horrendous reflux/GERD and painful osteoarthritis. We were both seeing doctors and specialists, getting poked and prodded with all kinds of tests, and were on multiple medications.

Then, after having lurked in the CFDG Facebook group for over a year, I realized that there were meal plans! So we decided to take the plunge, dive head first into a new way of eating, and see what happened. That one decision has transformed our entire lives in so many unimaginable ways.

Batching and eating all the plants became routine for me and I loved it! No more calorie counting, breaking food down into its parts, or restrictions for me. It was such freedom, and I was deliriously joyful! This time, as I was losing weight and feeling full of energy, I was truly healthy!

After an initial detox period, I gleefully experienced a complete elimination of IBS, a drastic reduction of migraines, was able to better manage the symptoms of Hashimoto’s, and dramatically reduced the frequency of episodic depression. It was a brand new life and I’ve never looked back!

Part of switching to a plant based diet, for me, was removing creamer of all kind from my coffee. That damn powdered Coffee-Mate was my Achilles’ heel for quite a while, but I finally left it behind and learned to drink my coffee black.

Then Molly asked the unthinkable…

I had let bad habits, vegan junk food, and plenty of wine back into my life, and the resulting weight gain, decreased energy, and a battle with depression in February shouldn’t have been a surprise. Molly had been letting me test a program she was working on and I was seeing great results. However, my progress slowed down and I hit the dreaded plateau. So Molly gave me some instructions, and as we were tweaking things a bit, she asked if I would like to do an experiment.

SHE ASKED ME IF I WOULD GIVE UP COFFEE FOR THREE WEEKS!

I literally fell to the floor in stunned horror and was immediately panic-stricken at the abomination of such a request. I think I gasped in sheer terror and clutched my heart in consternation. I don’t know. It’s all a blur.

One: I love Molly. I mean, I seriously adore this woman and the way she lives and moves in this world. I am in awe of this company that she and Luanne have built from the ground up. The way that she treats me as a friend and as an employee is nothing short of brilliant. Molly is the real deal. She celebrates my successes and helps me figure out my challenges.

I love the way she approaches a task and works incredibly hard to see it through. I admire her philosophical view of this world. I have said many times that I would shave my head, don ornamental robes, and move to a CFDG commune wherever she builds. I would turn over backwards and walk on my tongue on hot coals before I disappointed her. I have mad respect for this human being.

Two: I love coffee. I mean, I seriously adore the smell and taste of this brewed bean. I have a 12-cup AND a 5-cup coffeemaker, a full-size AND a travel Keurig Brewing System, a cappuccino maker, and a French press. I have an entire cabinet dedicated to nothing but coffee supplies. I hunt out different coffee shops in any city I visit in order to bring home locally roasted coffee and mugs as souvenirs.

I love the feel of a warm cup of java in my hands. The baristas at all three of the coffee joints near my house know me by first name. My alarm in the morning is the beeping of the coffee maker letting me know that the timer-brewed, fresh pot is on! I have coffee decor in my kitchen for fuck’s sake! I’m thoroughly convinced it is the nectar of gods, and in the right hands, has the potential of bringing world peace.

Do you see my dilemma?

So with fear in my heart, trepidation in my soul, and a really bad attitude, I agreed. But, it wasn’t without warning! I told Molly up front that she would be named in the divorce proceedings when Lori had had enough and filed the paperwork. She graciously sent me a picture of her guest room with the invitation to come stay with her when Lori kicked me out for an intolerable level of bitchiness. She sent me an inspirational quote set in a lovely field of lavender to which I rolled my eyes and gagged.

Here are the results…

Molly’s experiment for me was based on what she had learned about the link between coffee consumption and the craving of sweets and fat.

I knew that, at first, I would have headaches and jitters as my body detoxed from the caffeine, but beyond that I knew I would just miss my coffee. And all of that happened.

But, here’s the thing!

Eliminating coffee, along with the other things we were trying, worked! It was the jumpstart that my body needed, and I actually started feeling better mentally and physically. The weight started gradually dropping again, and by the end of the three weeks I was able to go down a size in jeans.

It would be a lie to say that I’m quitting coffee. In fact, as I write this, there’s a fresh cup (of decaf!) sitting right beside me. However, I have decided to make some big changes and stick with it. I’ll limit myself to two cups in the morning, and then if I just have to have a cup in the afternoon I will choose decaf.

But what I have found so interesting (about this well-intentioned if not horrifying experiment) is that I did it! I’m so impressed and proud of myself for doing something that I positively knew I could not do. I now know that if I truly want something, even the hardest thing possible, then all I have to do is set my mind to achieving it!

What is it that you think you cannot do?

Do you think you can’t batch-cook the CFDG Plant Fueled Meal Plans?

Do you think you can’t ask for a raise, or chase a new job?

Do you think you can’t release extra weight, or get healthy?

Do you think you can’t stand up for yourself in your relationships?

Do you think you can’t change your way of eating?

Eleanor Roosevelt said: “You must do the thing you think you cannot do…”

In the grand scheme of things, giving up coffee for three weeks, doesn’t really seem like much to do. But, when you sit back and realize how much our actions, consistently over time, can transform our lives it is an awesome revelation!

There’s so much pure strength in the absolute knowledge of how much personal power we really do have over our lives. We may not have the power to change the shitty things that life sometimes deals out, but we have total and complete power over our attitude, perspective, and how we deal with those things.

And in the end, my sweet friend, we have the power to choose love and action over fear and despair.

And that is everything!

Have you ever quit something that was really, really hard to quit? Talk to us in the comments below, we would love to hear about it.

As this cools in the fridge it will get thick. When heating it up, add some non-dairy milk and stir until it reaches a good consistency for you and it smoothes out.

Wishing you a happy week. May it be filled with doing the thing you think you can’t do. 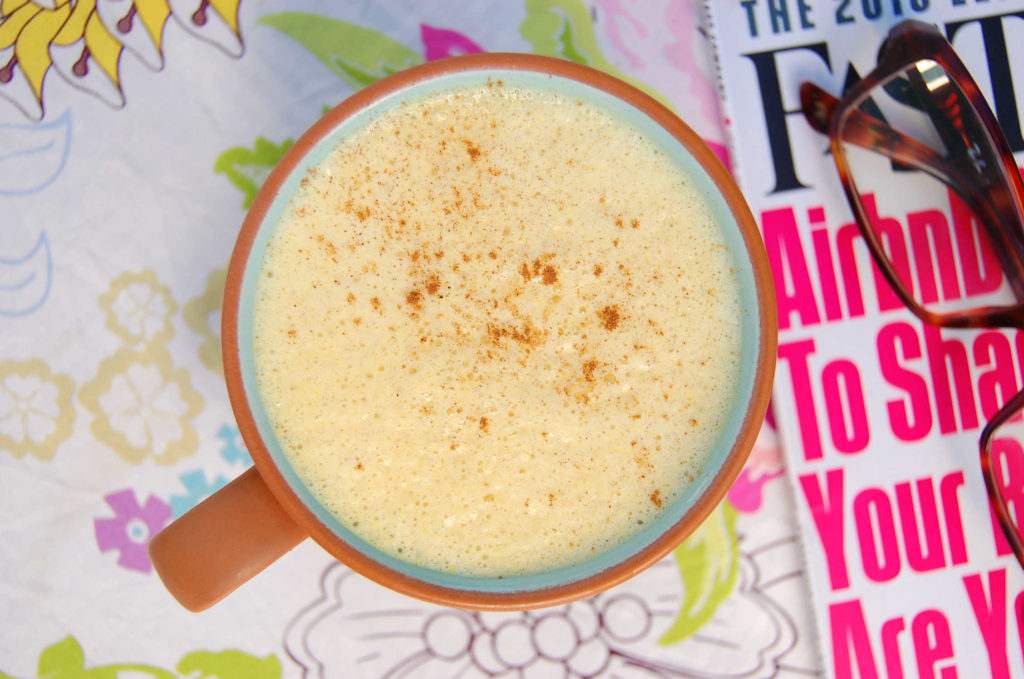 I Have No Interest In Cleansing Your Energy + Turmeric Vanilla Latté 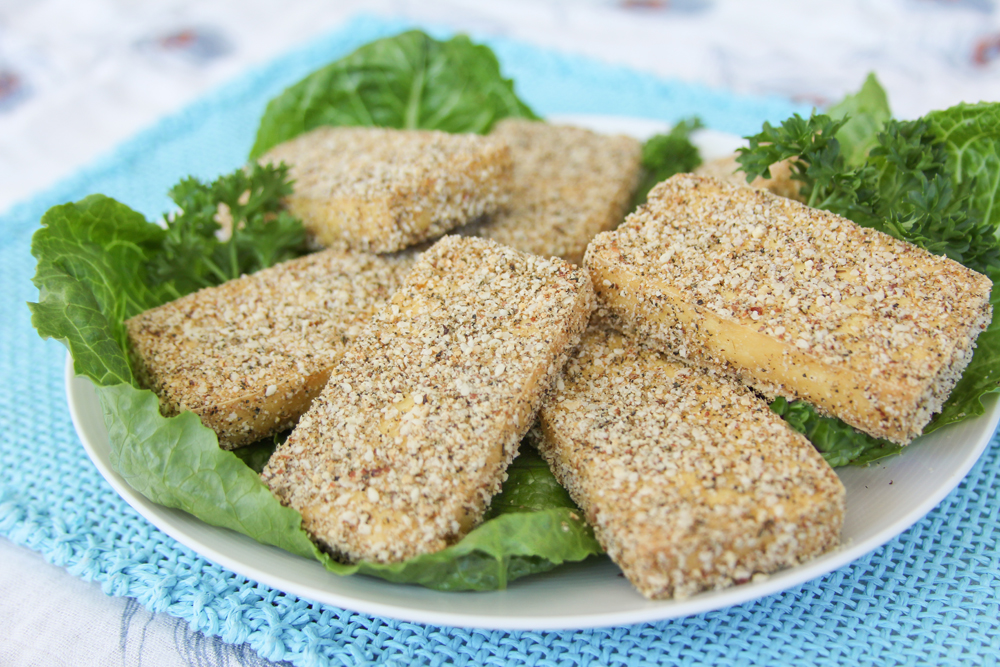 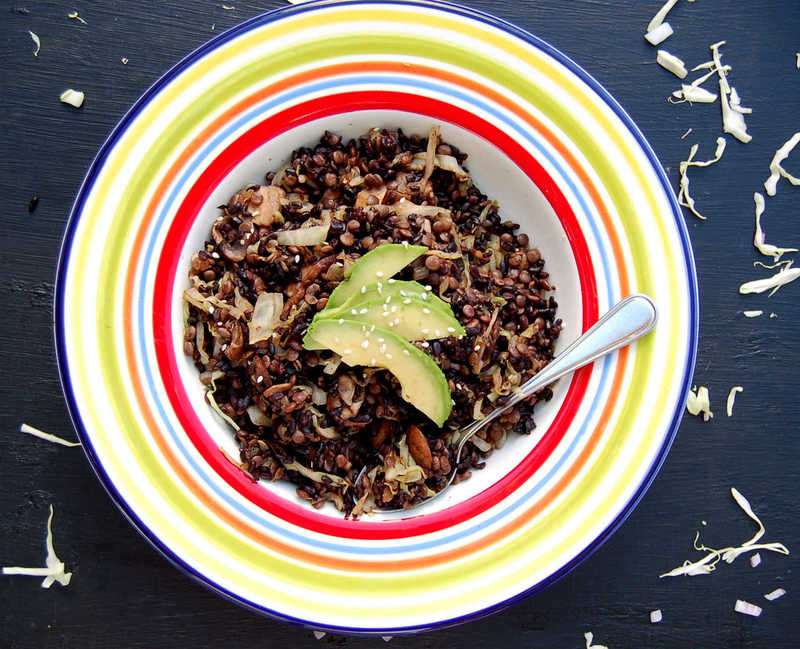