Plant Based Eating at a Ryokan in Japan (Traditional Japanese Inn) 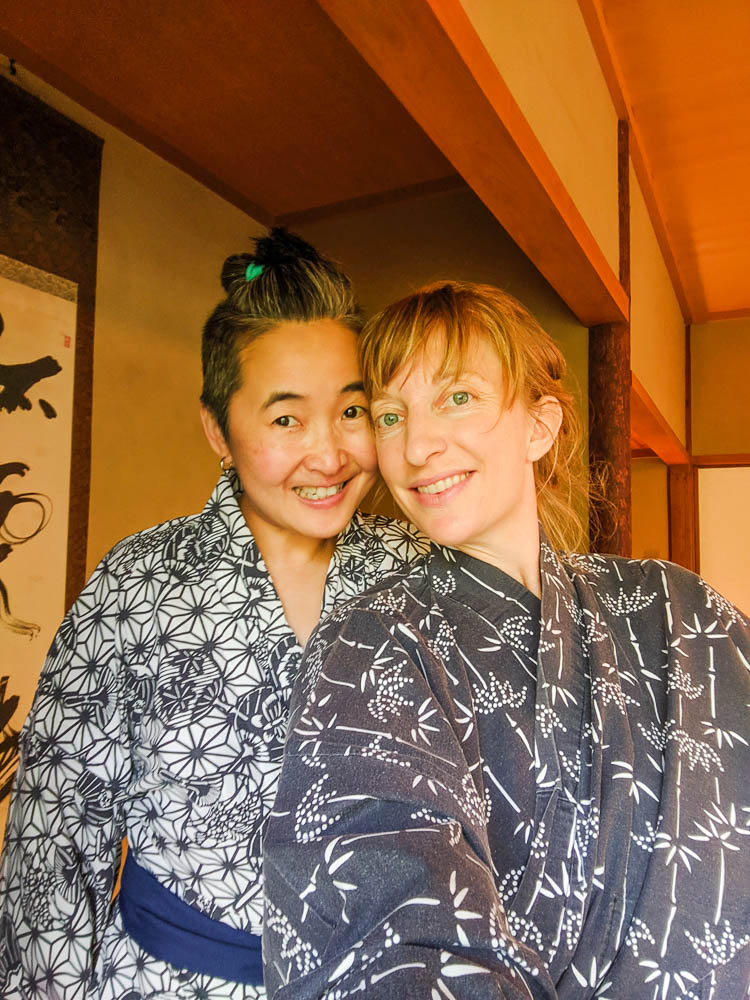 A ryokan is an old school Japanese inn.

When I say old school, I’m not talking about ‘80s retro. I’m talking 17th century days of old. Ryokans have been around since the early 1600s- they are some of the world’s first hotels.

You don’t stay at a ryokan, you experience it.

Imagine a Motel 6. Now imagine the extreme opposite of that. Throw in a natural hot spring to bathe in (known as an “Onsen”) and an 11-course plant-based meal served to you in your room, all while being nestled in a tranquil forest.

On our recent trip to Japan we stayed one night at a plant based friendly ryokan outside of Osaka. There were a lot of ryokans to choose from, but not all of them had an onsen and that’s what I wanted to experience.

We chose to stay at Nanten-en because there was availability, I could request all vegan food, and it was a bit less expensive than other ryokans we looked at.

As a side note, staying at a ryokan is not cheap (hence the one night stay), it is a splurge to say the least. My po-dunkness struggled with the cost (around $250 per person per night) until I reminded myself that I don’t have kids so there will be no college expenses for me! Bring on the ryokan – it was time to enjoy.

And I did more than enjoy, I BLISSED.

Here’s a snapshot of our stay at the ryokan.

This is not a sponsored post, nor did we get paid (or a free night’s stay) by the ryokan or travel gear mentioned or photographed in this post. 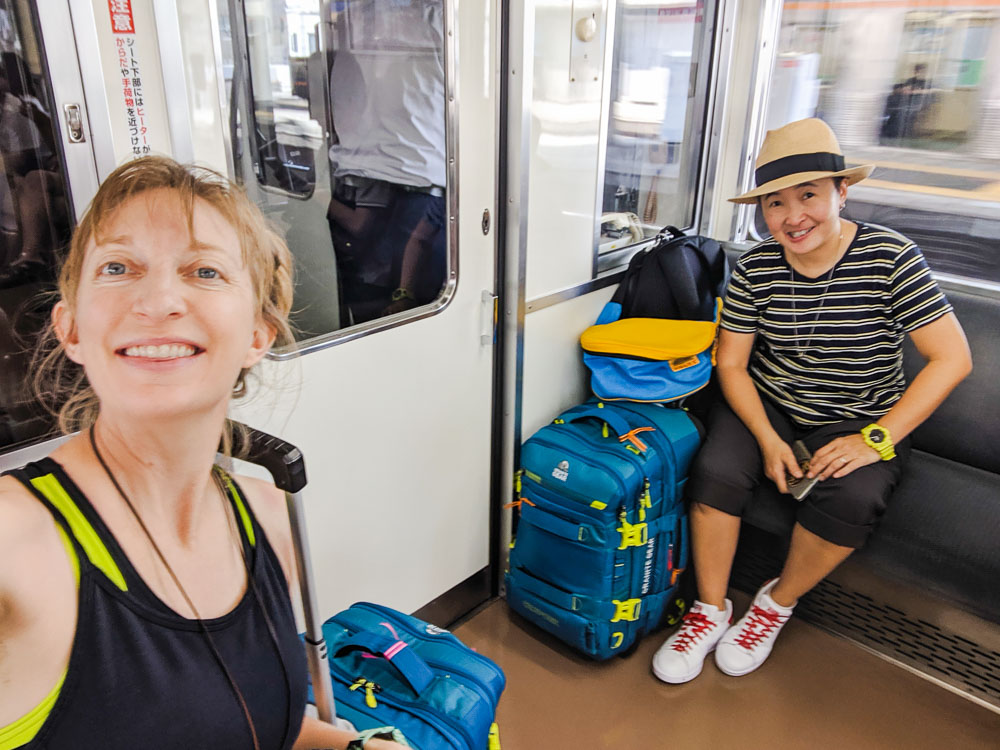 Here we are on the train from Osaka to Nanten-en. The inn was a 2 minute walk from the train stop. 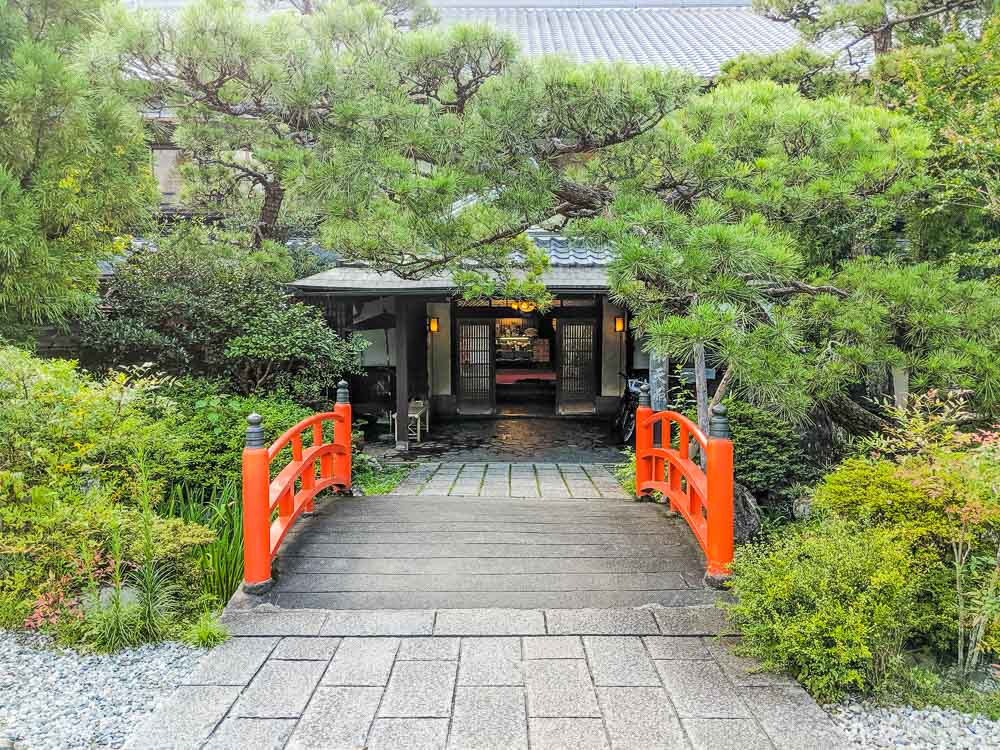 The entrance of the ryokan. It is only 40 minutes from the city but you feel totally tranquil upon arrival thanks to beautiful nature all around you. 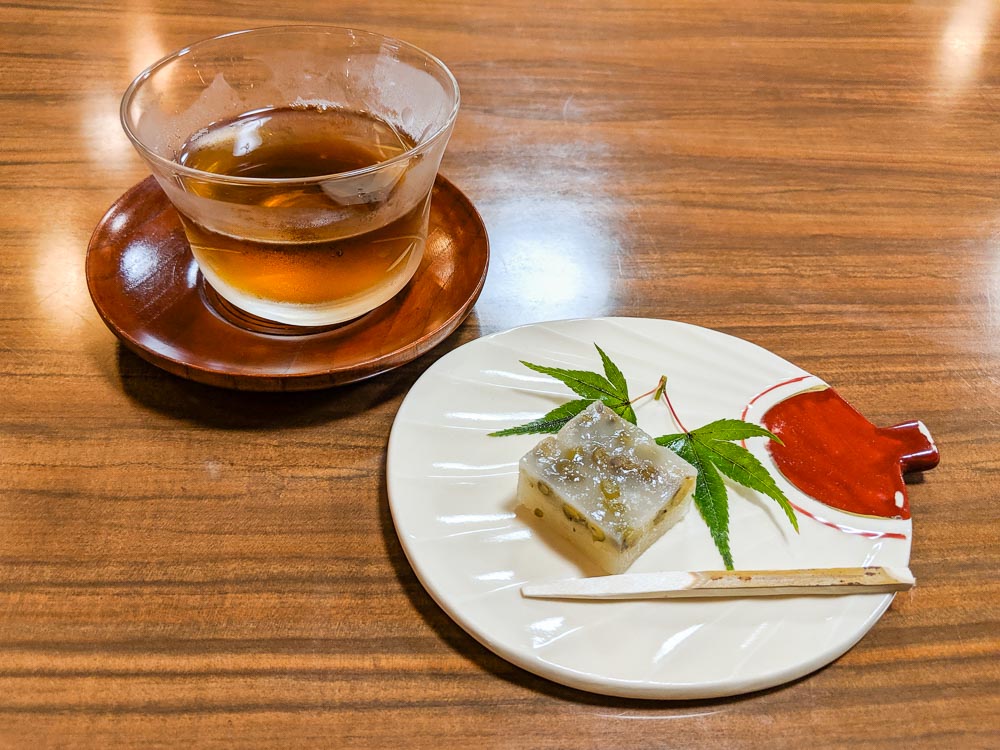 When we walked in we were warmly greeted by two women who took our bags and our shoes and gave us slippers to wear. We were shown to a beautiful waiting room and given tea and a lightly sweetened snack made from rice. 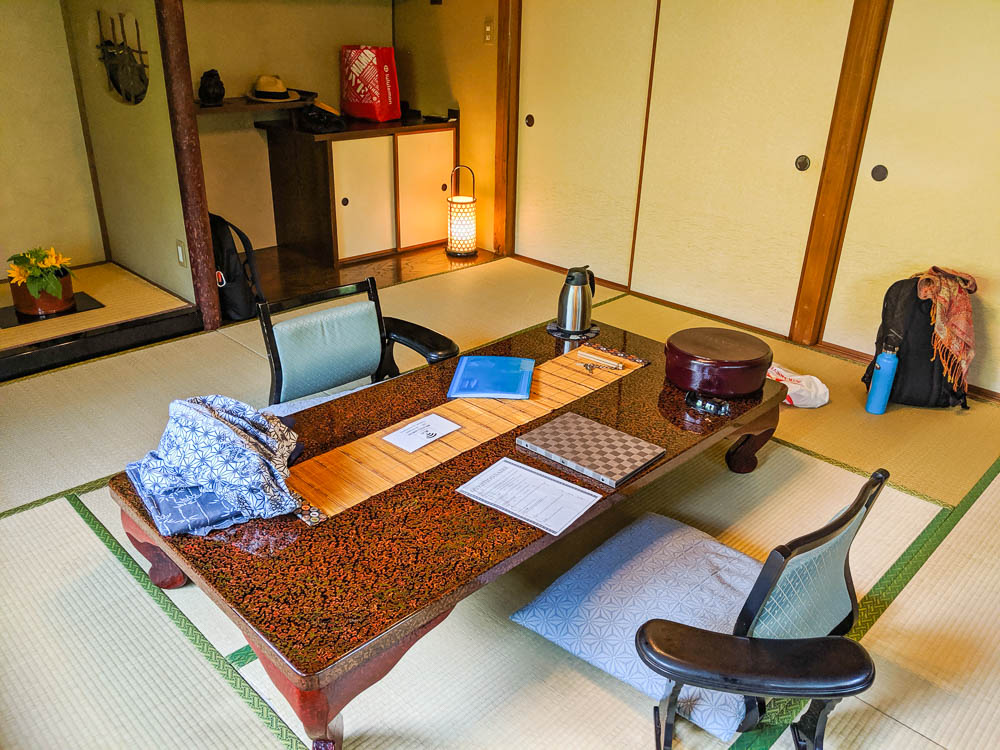 Our room had a traditional tatami floor, sliding doors, a long table to eat and have tea,  and huge windows overlooking a Japanese garden (is it just “garden” since we were in Japan??). Ryokans do not have beds in the rooms.

At bedtime, two women come into the room and move the long table aside. Then they put down futons and make them up with fresh bedding. In the morning after breakfast they remove the beds and put the table back. 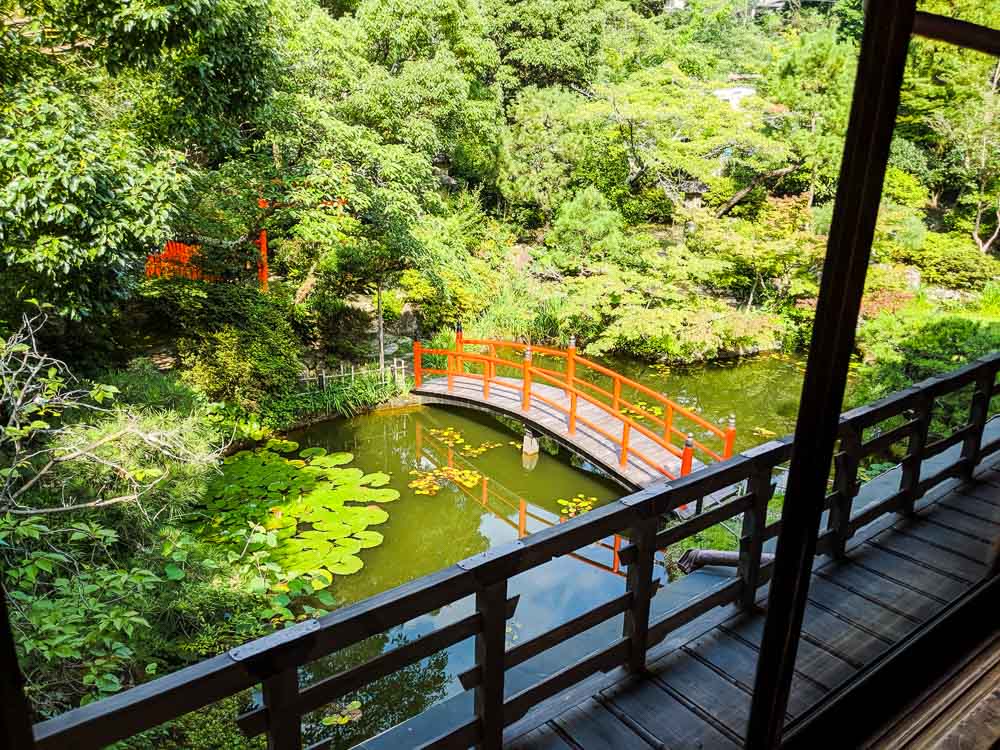 The view of the garden from our room. 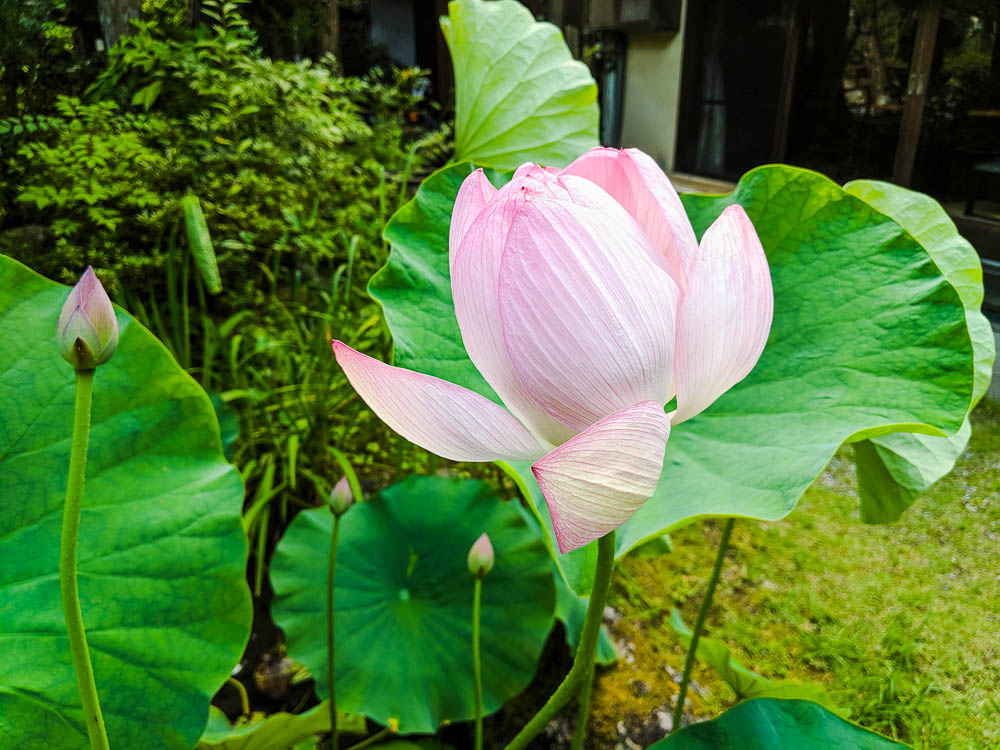 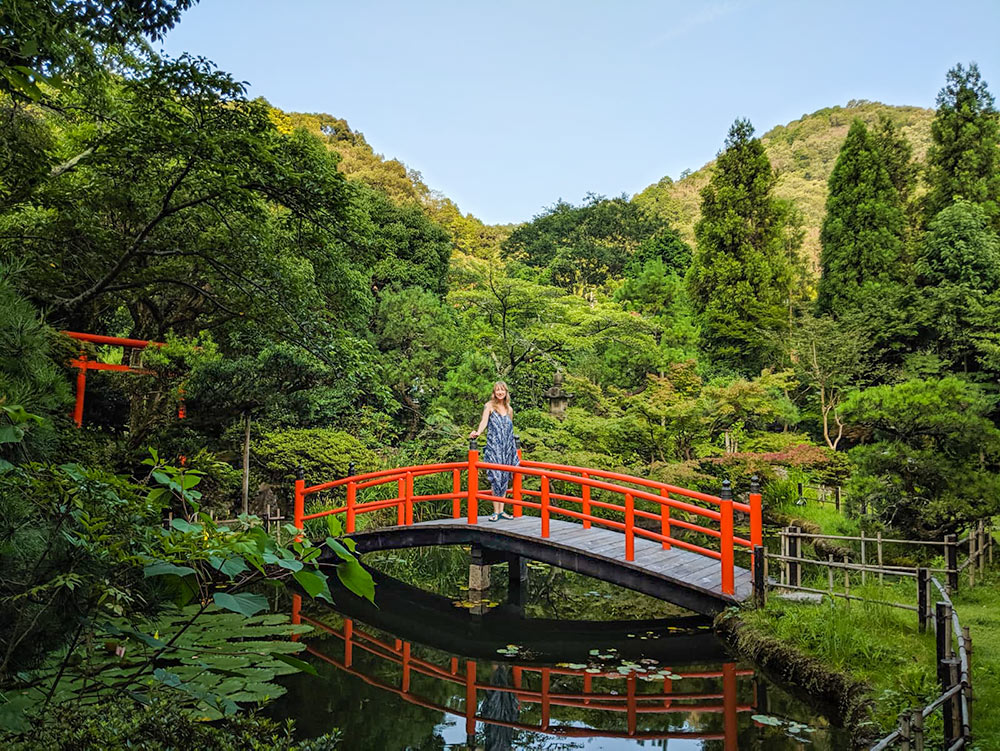 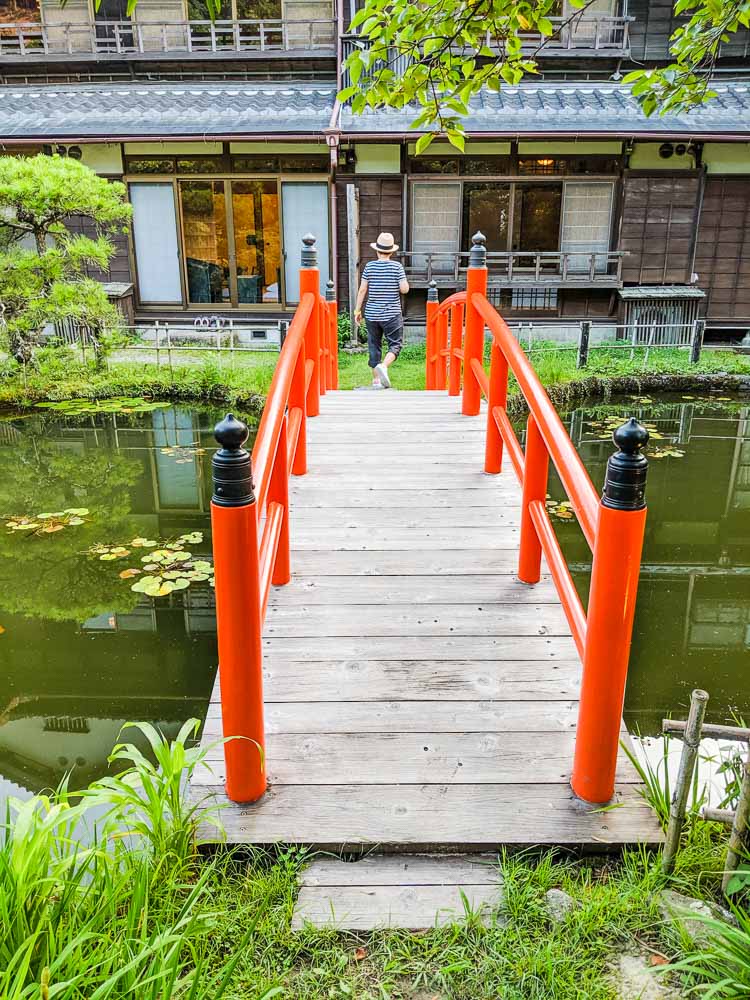 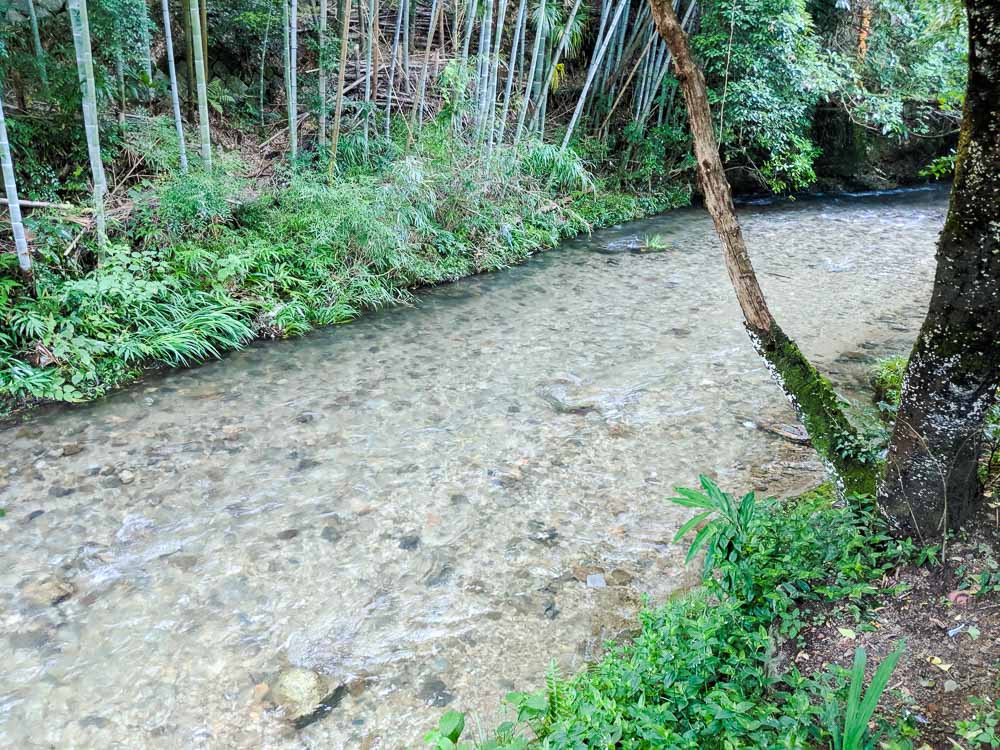 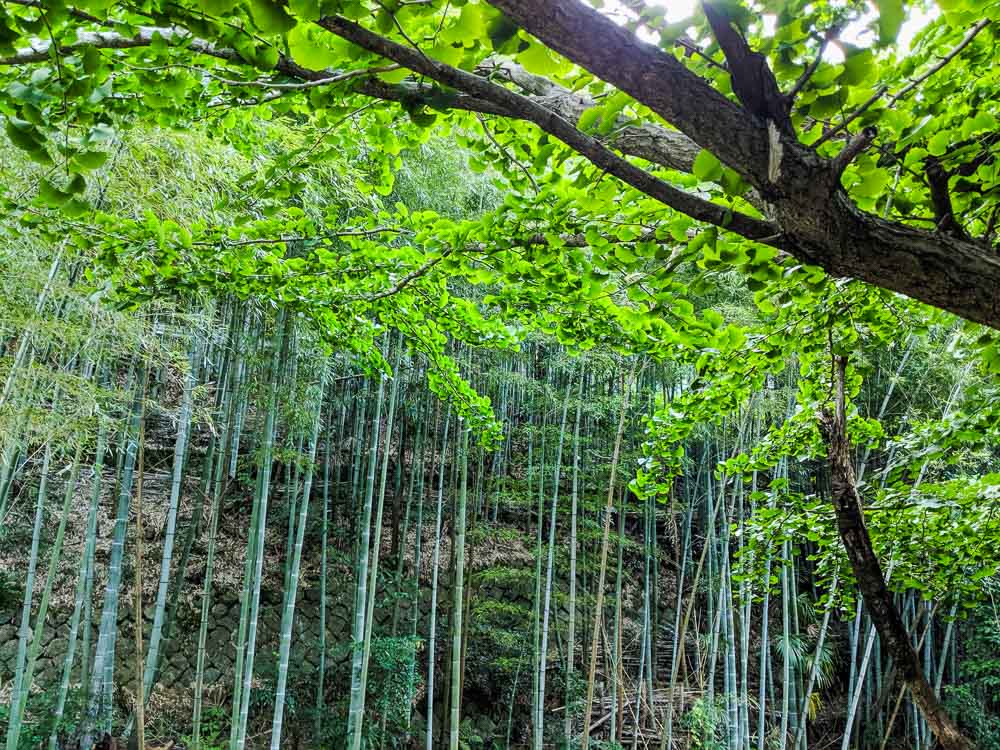 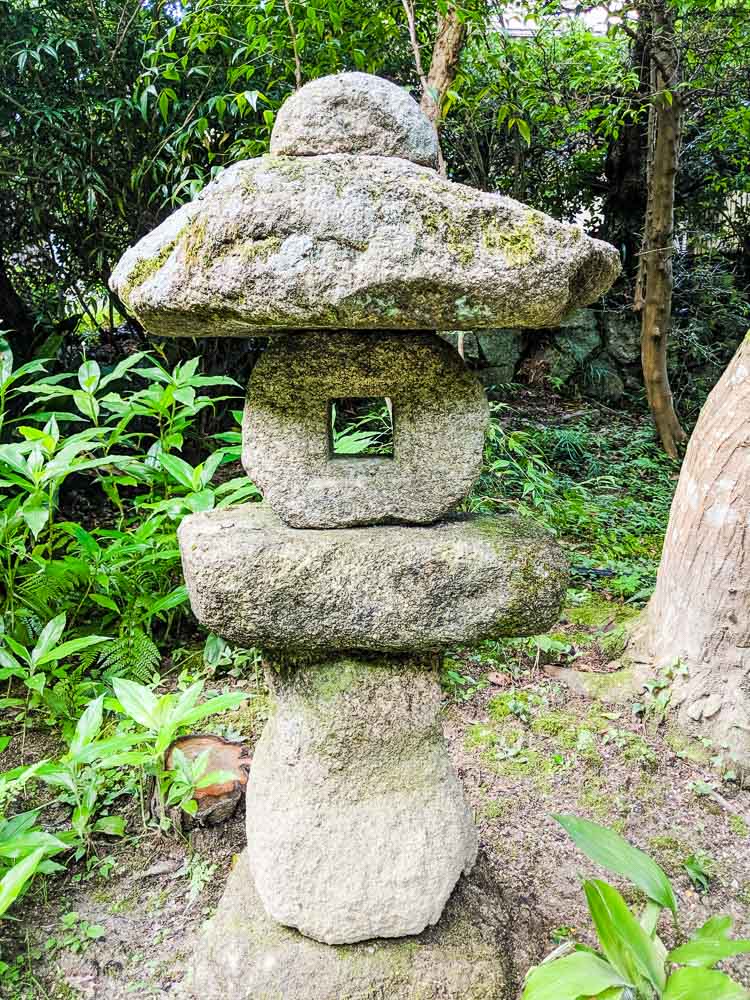 Here I am exploring the grounds of the ryokan. There were shrines, bridges, flowers, beautiful trees, a flowing river – I was so at peace and happy walking around outside. 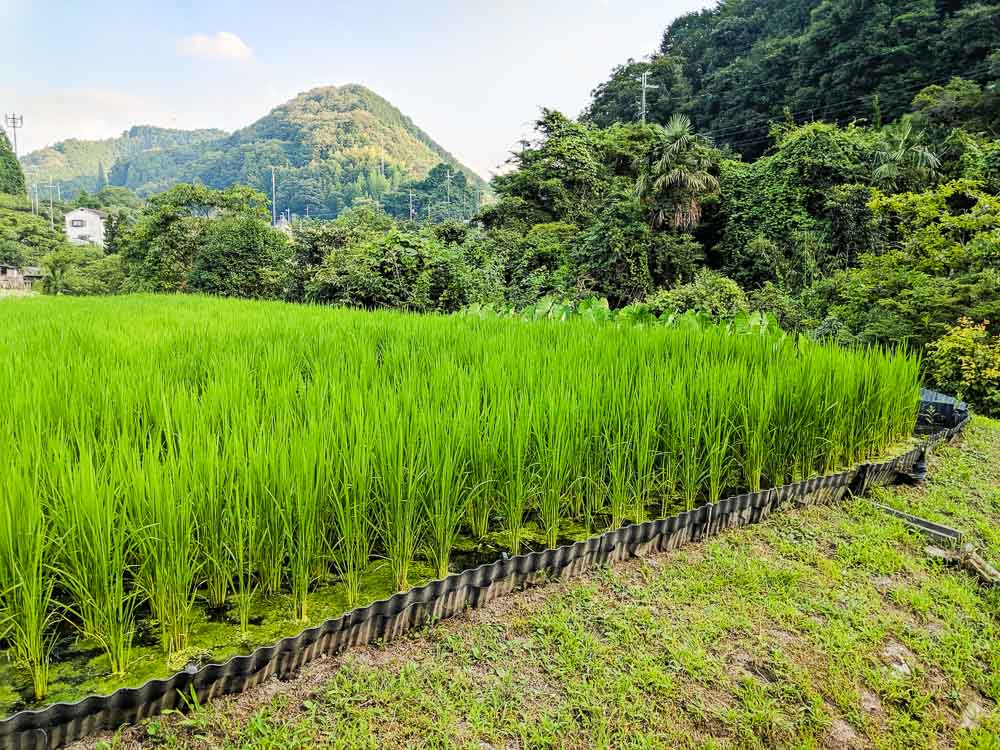 If you’ve never seen rice growing, here you go! A small rice field was just across the road from the inn.

Click on the number 2 below to get to the next page. 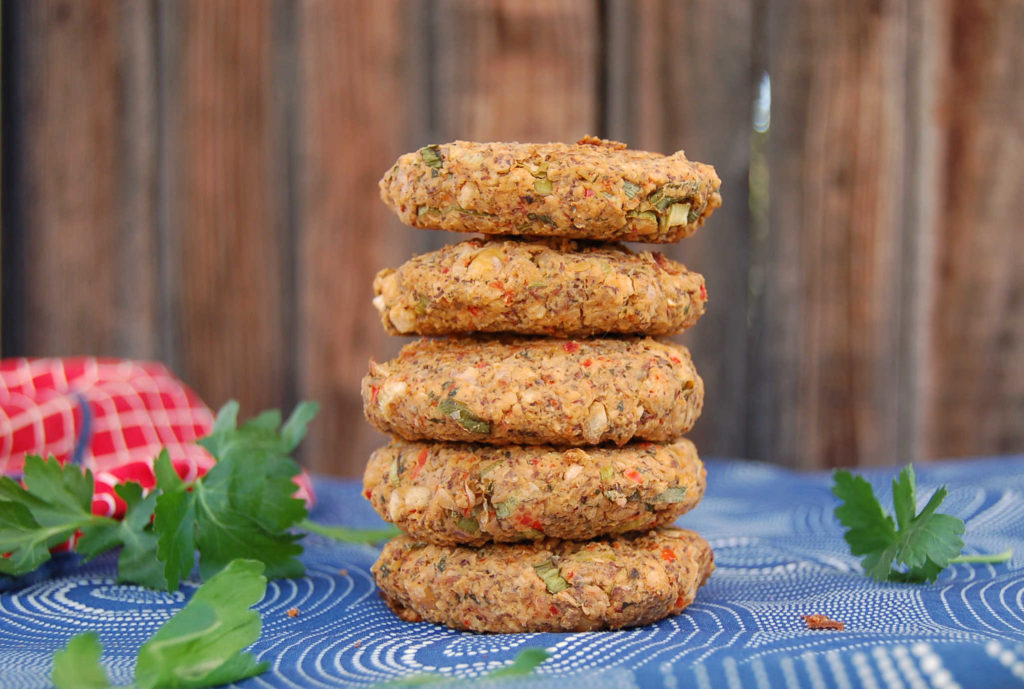 Flaxseeds: What You Need to Know + Chickpea Crab Cakes 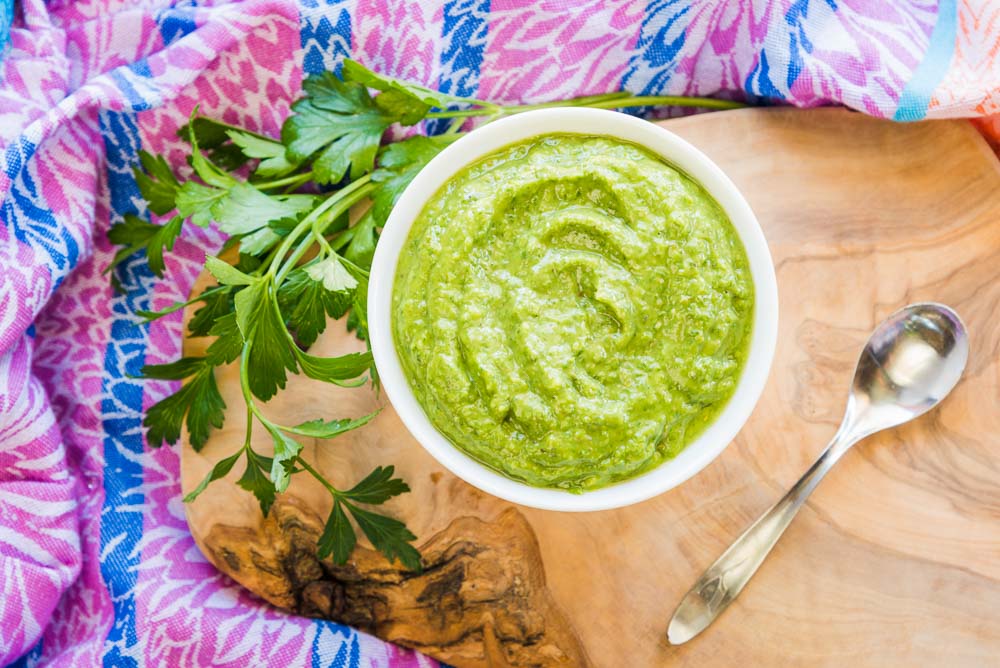 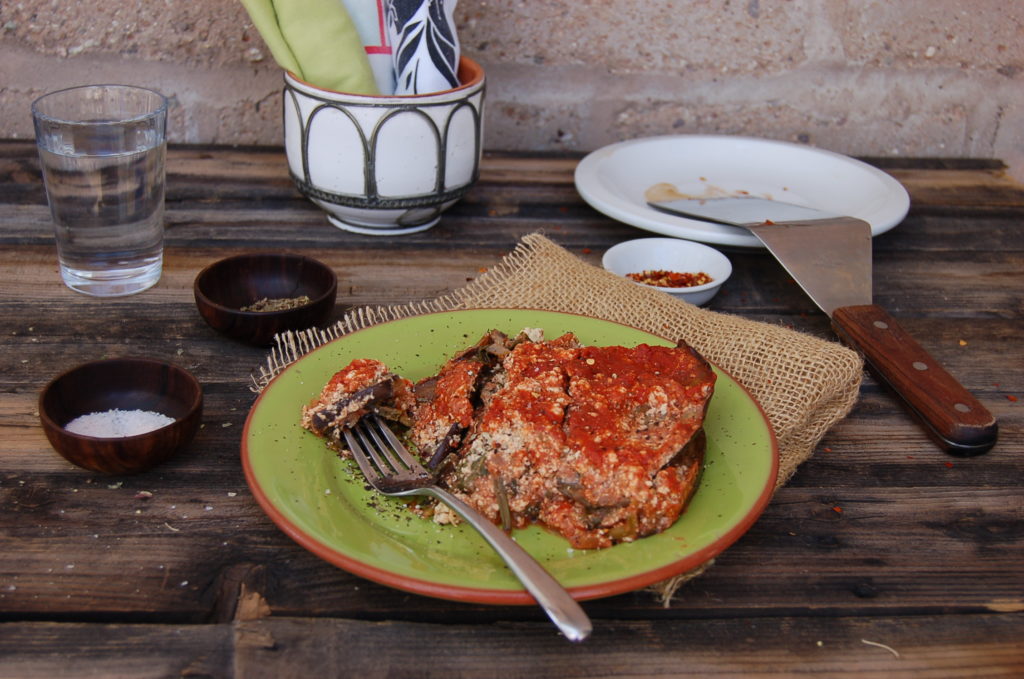