Do You Want To Lick My Detox? + Coconut Polenta with Roasted Root Veggies and Tangerine Cashew Cream 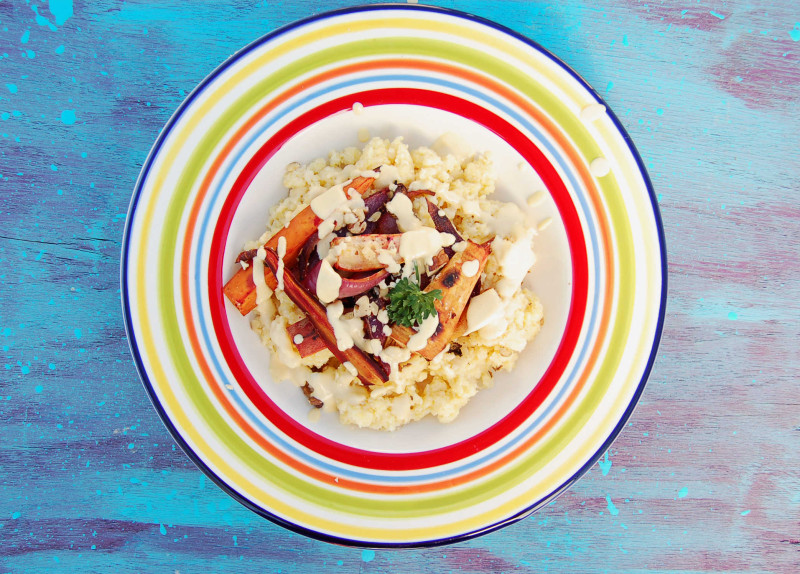 Hey baby, do you want to lick my detox?

Oh yeah… as long as you rub my cleanse in return.

I’ll rub your cleanse if you put your scoby in my dosha.

Okay, but only if your scoby is free of carcinogens, GMOs and gluten.

Oh, my scoby is clean, my sexy prana bear.

Oh yeah…. let’s take some probiotics and DO THIS.

And then when we’re done, we can get our energy read and go for a superfood, goji berry colonic.

Blow that didgeridoo baby – let’s get this fuckery started!

I’m pretty sure this conversation has happened – probably this year, and probably in San Francisco.

There are certain buzz words that catch on easily. Detoxification and Cleansing are two of them. Scoby, which is the starter or “mother” for making Kombucha, might not be hot yet, but give it a sec – it’ll eventually be on Gwyneth’s top 10 list.

When someone tells their friends that they’re doing a detox, it’s in the same category as announcing their first 10k, blowing up their Facebook feed with details of the silent yoga retreat that they just booked, or dropping the news that they just bought a plane ticket to Africa to help build orphanages – it’s annoyingly fucking perfect.

But hear me out, because that trip to Africa might be envy worthy, but the detox stuff is bullshit.

Detoxes and cleanses are easy sells because who doesn’t want to “detoxify the system, clean out the cells, have a glowing complexion and shed extra pounds fast”?

That sounds pretty damn tempting, especially if you feel bloated, sluggish, hungover, unmotivated to exercise, and can’t put down the fucking potato chips. I don’t know about you, but most of my life has been spent in the bloated potato chip category and less in the 10k, silent retreat category.

But before you get swayed by sexy buzz words, know this.

Buying a detox in a box when you’re not at your healthiest is like buying a lottery ticket when you’re broke. It’s full of good intentions and hope, but it inevitably turns into a waste of time and money and you’re left with nothing to show for it.

Over the counter detoxes and cleanses come in pill, powder, herb, and liquid form, and they generally contain herbal laxatives that stimulate the colon and activate the poop shoot, giving the impression of shitting out all the backed up toxins in your body and “scrubbing the system clean”.

Then, we have DIY cleansing and detoxing. The soup cleanse, the maple syrup cleanse, the lemon water cleanse, the apple cider vinegar detox, there’s a shit ton of them out there. The DIY varieties are generally full of less bullshit than the detox-in-a-box method, but they’re still a waste of time and they distract from the real solution for solid, consistent, kick ass health.

Detoxification is a basic function that’s built into the human body and happens automatically on a daily basis. During this process, toxins are naturally eliminated through the colon, liver, kidneys, lungs, lymph and skin.

The more nutrient rich whole plant foods that are in the diet, the more efficient the body’s built in detoxification system works. So, the better you eat, the easier and more efficiently your body can do its job and keep things shiny, clean, and working properly.

Here’s where the scoby gets kinky (as a side note, Kinky Scoby is my new imaginary band name).

The opposite is also true. When we eat a crap diet full of processed food, sugar, saturated fat, alcohol and white flour, the body’s detoxification system can’t keep up with the heavy load of toxins and we start to feel (and even look) like shit because of it.

So the shittier that we eat, the less efficient the body becomes at keeping us clean and healthy. And when this happens, no bottle of pills, detox tea, maple syrup concoction, or herbal supplement will get our natural detoxification function back on track.

The only way to get our built in detox factory working efficiently is to eat a nutrient rich diet and cool it with the foods that got it off track in the first place.

The only thing that can successfully cleanse and detoxify the body, is the body itself – no box of pills can do this for us.

And when you eat the right fuel, your body will do exactly what it needs to do all on its own, and you’ll be constantly cleaned out, refreshed, energized, super damn healthy and ready for anything.

As far as morning routines like drinking ginger tea or lemon water – of course it doesn’t hurt, especially if you haven’t been eating super healthy. But if you’ve been eating like shit and expect lemon water to undo all of the damage and clean you out, that’s not going to happen.

You have to look at the bigger picture and focus on eating nutrient dense foods at every meal and eliminating foods that caused the internal detox system to become strained and overwhelmed in the first place.

And if you’re already eating like a fucking champ, than a warm glass of plain filtered water in the morning is all you need to get your system purring like a goddamn didgeridoo.

If you’re fresh off the booze and shit food boat, then doing a green juice fast can be beneficial to give your detoxification system a jump start, but understand that doing a nutrient rich fast is different than buying some detox pills and calling it a resolution.

The picture that today’s fuckery paints is this:

Don’t be swayed by sexy buzz words, and know that you don’t need to detox or cleanse, you need to eat whole plant foods in their natural state – every day. This will change your entire life.

Your friend might have Africa, but you understand that you have the power to detox all on your own – and that’s just as annoyingly fucking perfect.

You can now officially go buy a didgeridoo.

To easily incorporate everything that your body needs to detox on a daily basis, sign up for my Plant Fueled Meal Plans. All you have to do is follow along and eat!

Today’s recipe is really yummy for breakfast. Make this instead of eggs and bacon and your built in detox system will thank you for it. 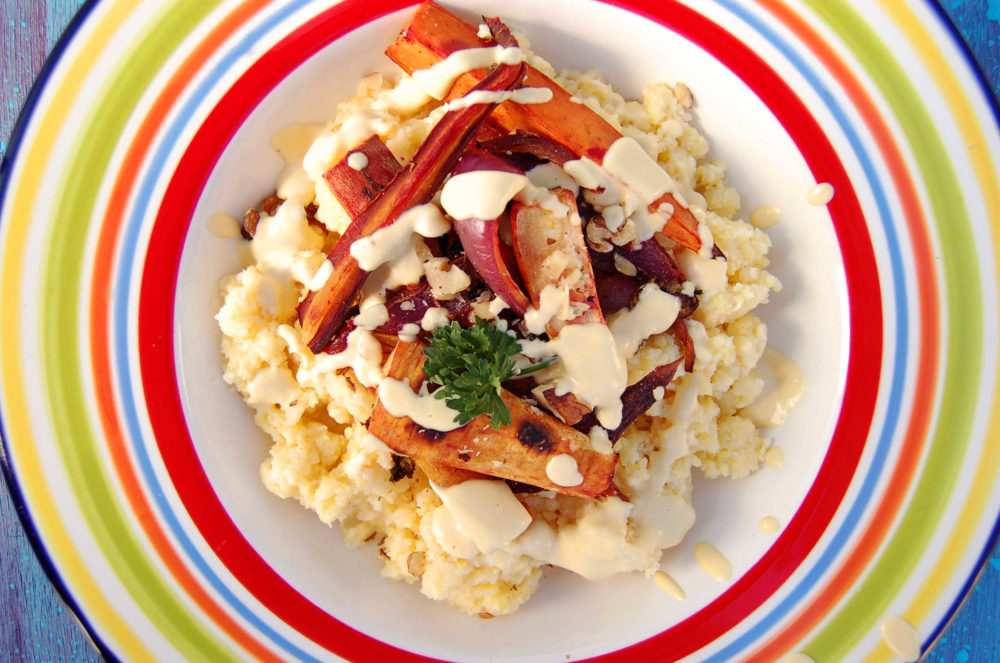 For the Roasted Root Veggies

For the Maple Tangerine Cashew Cream

This recipe has three parts - you can make them in advance and then put it together when you’re ready. 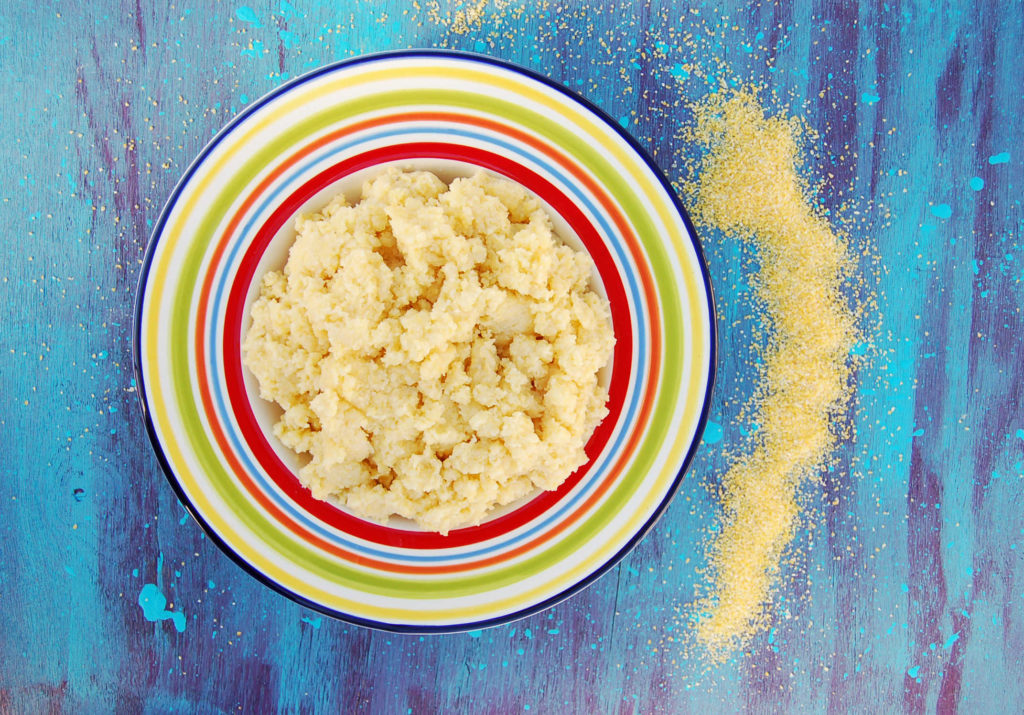 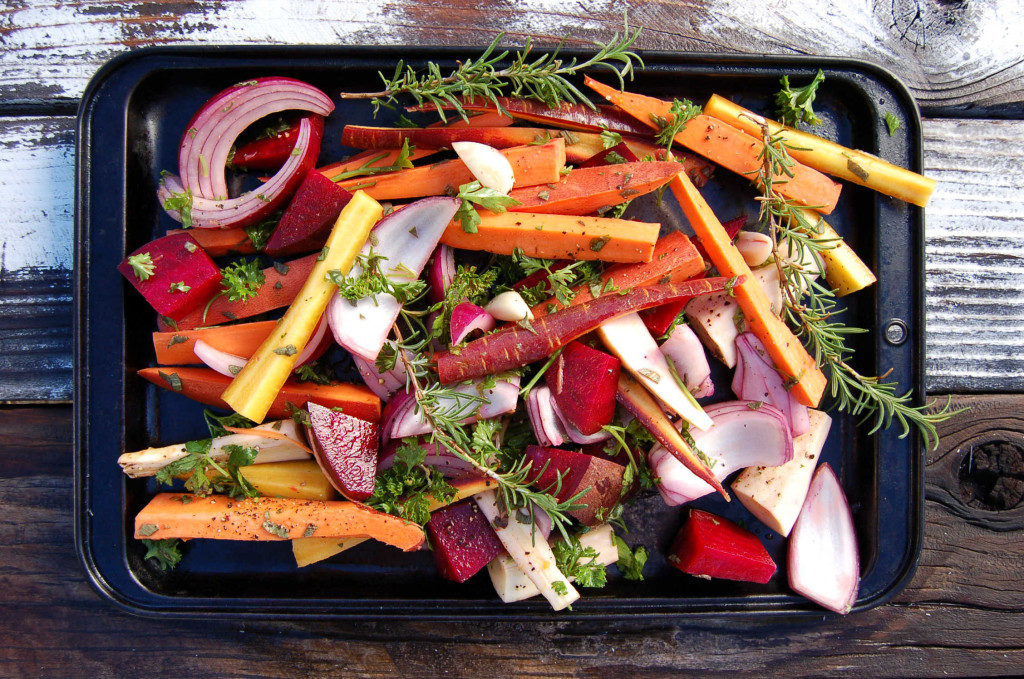 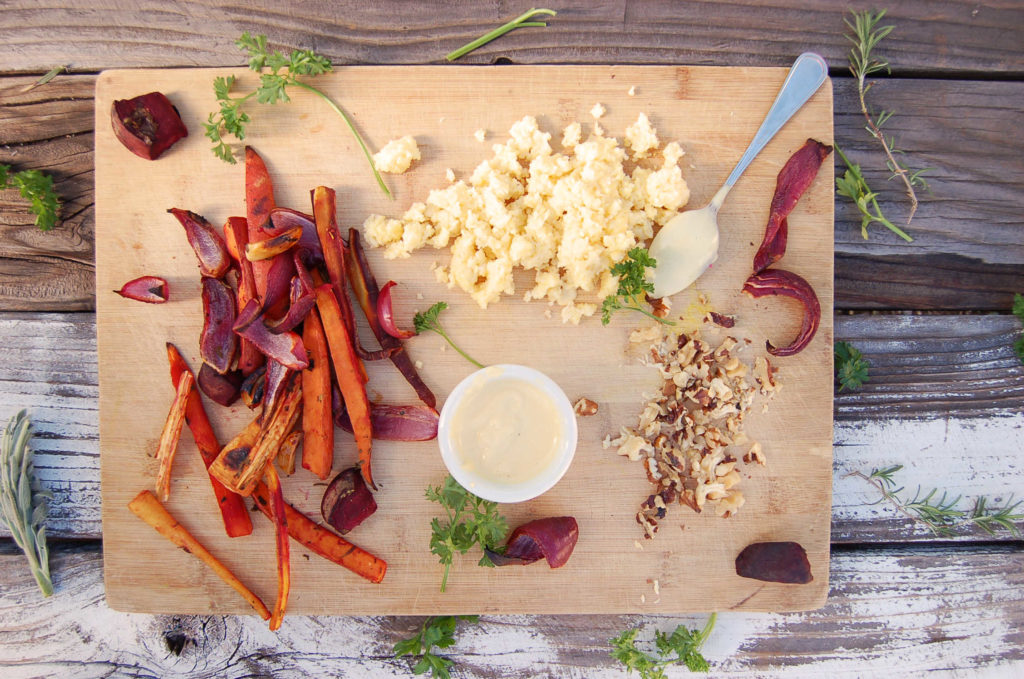 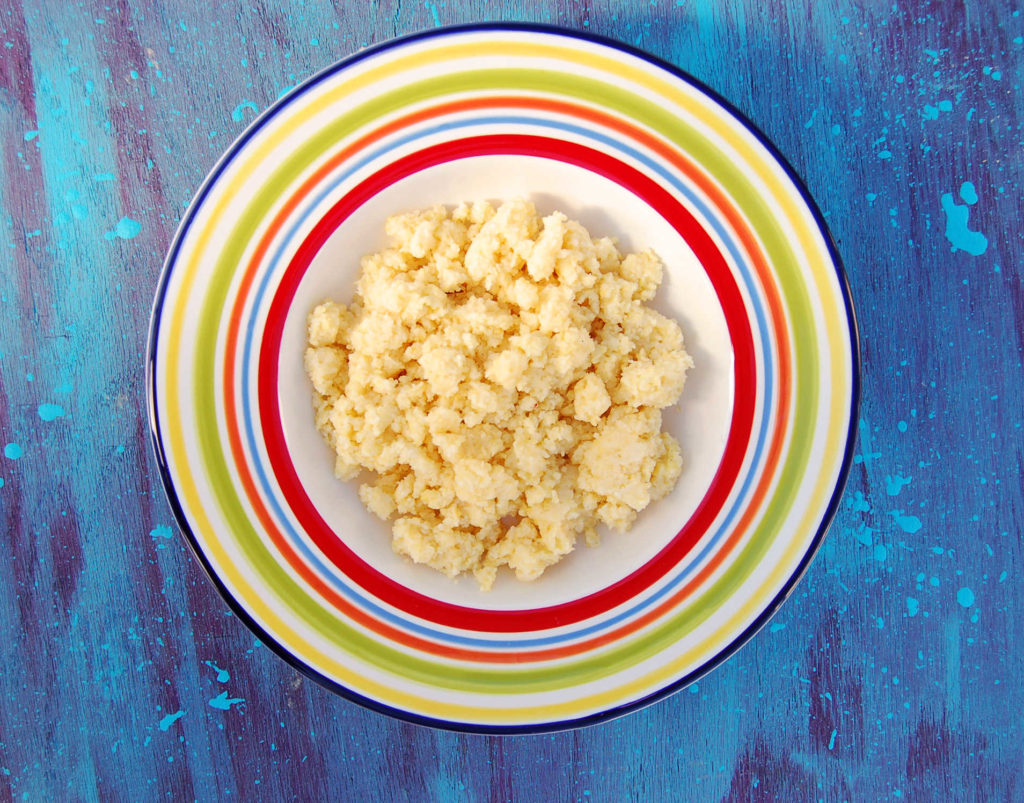 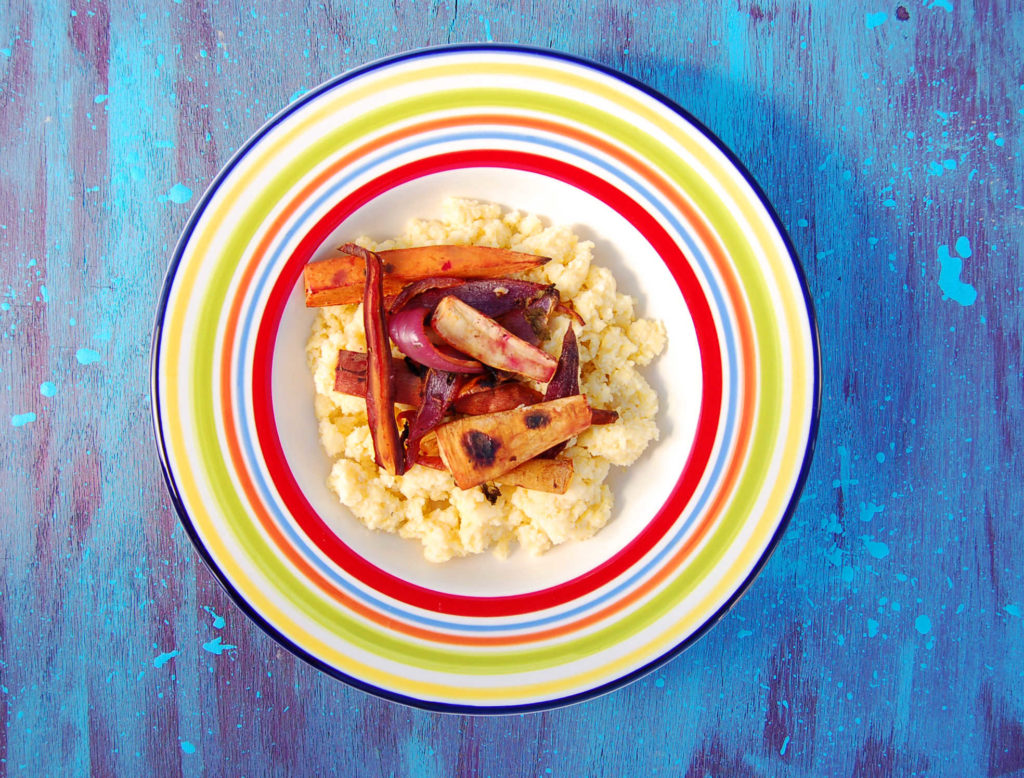 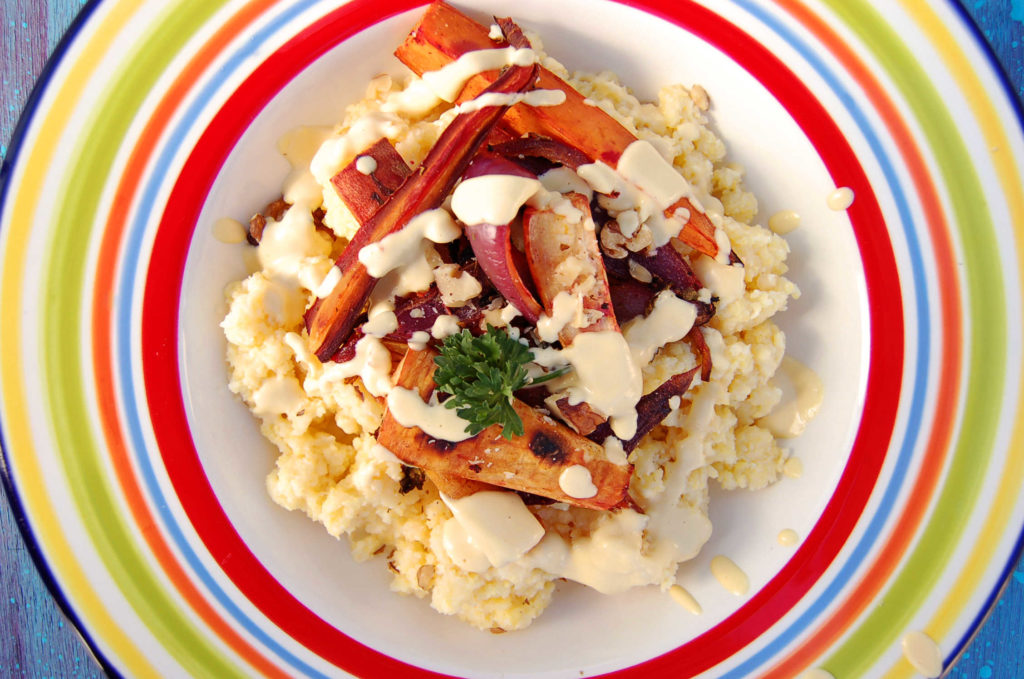 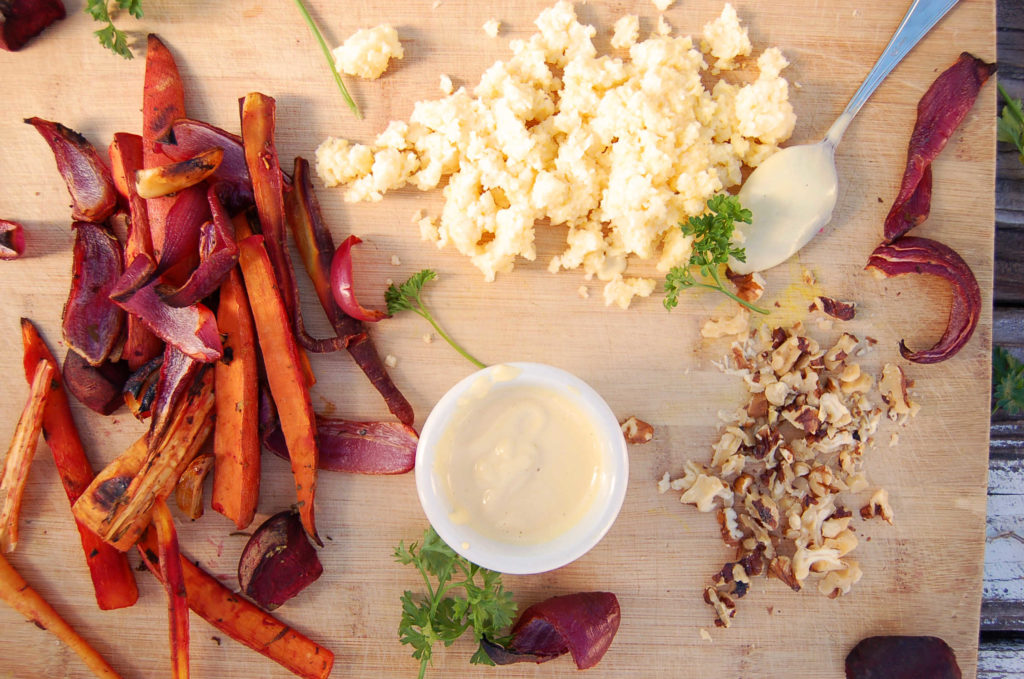 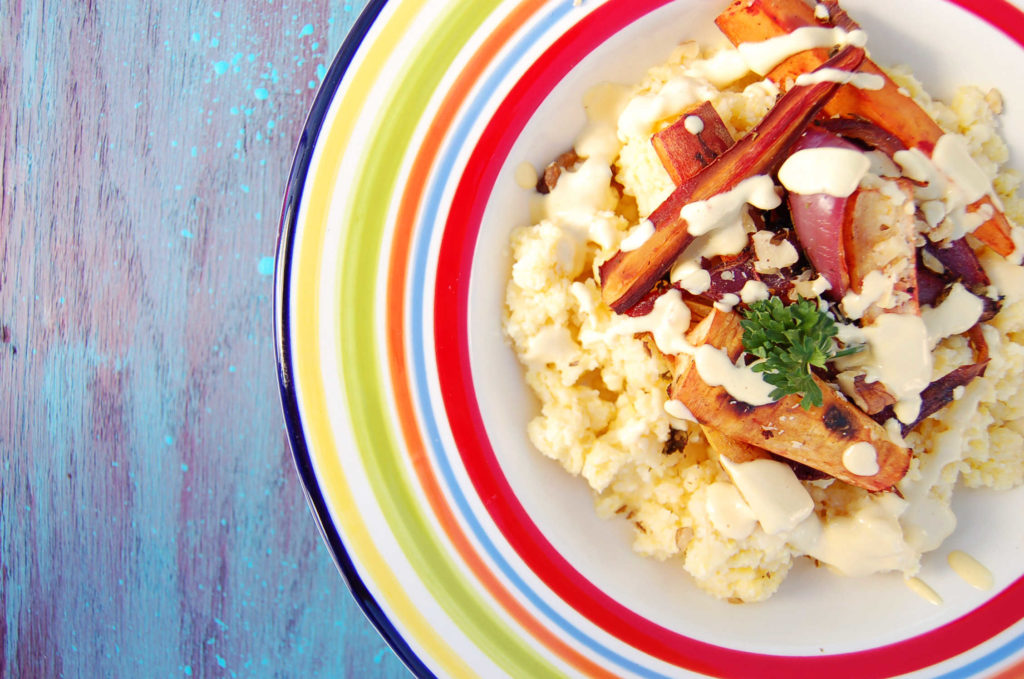 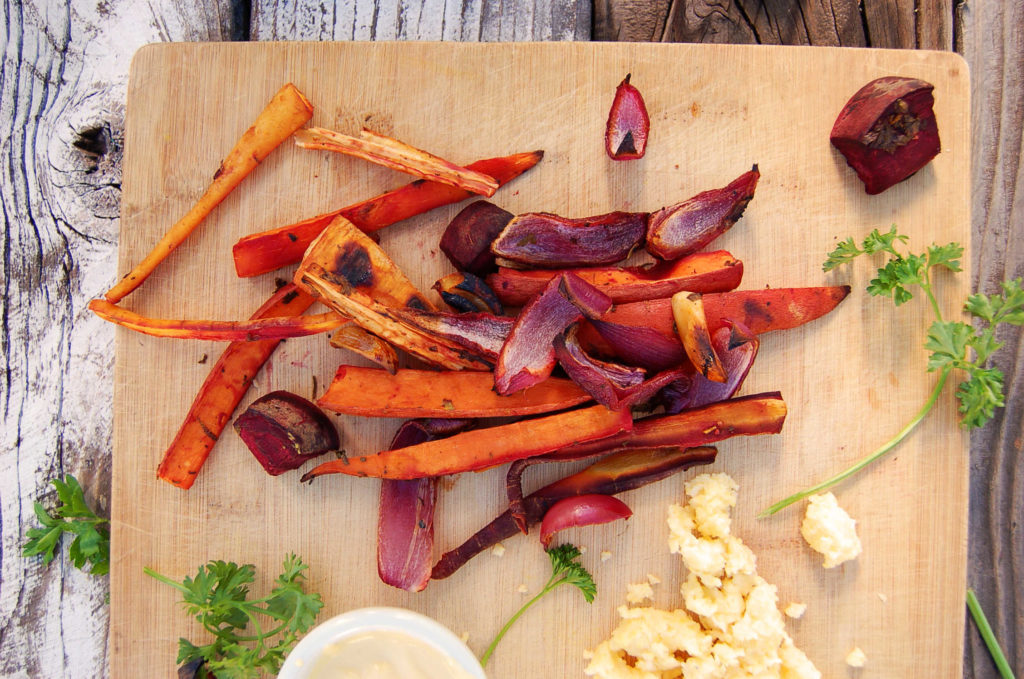 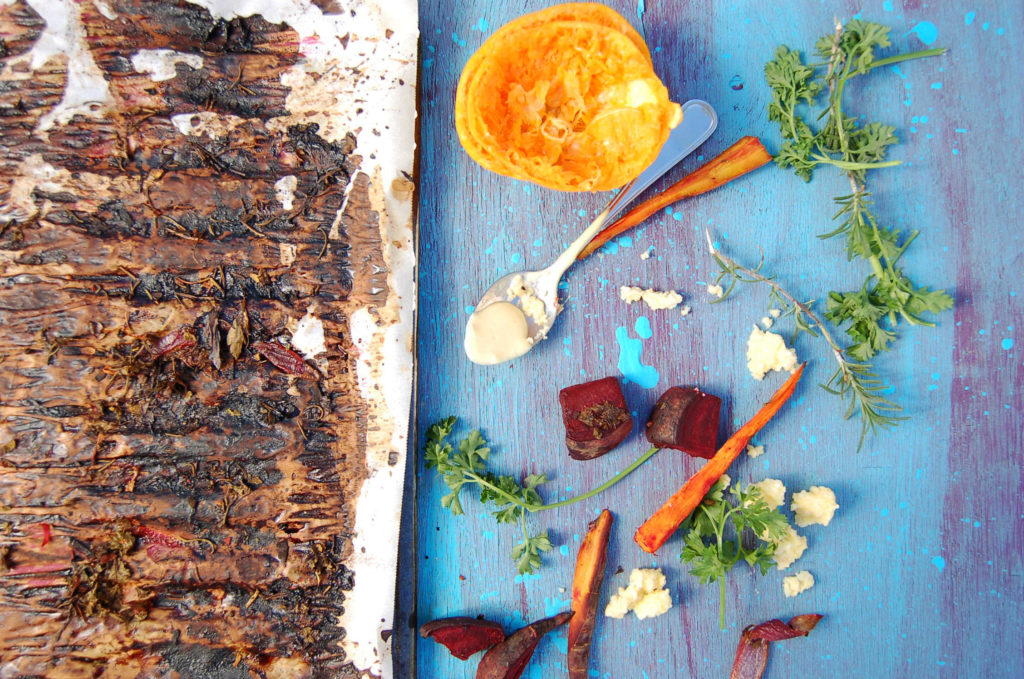 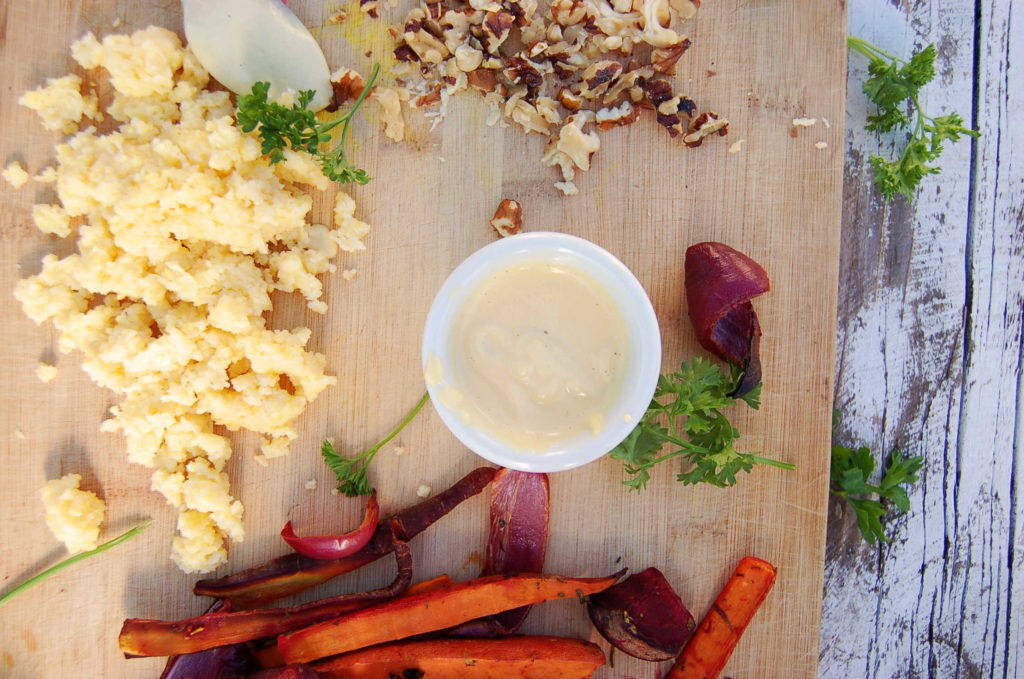 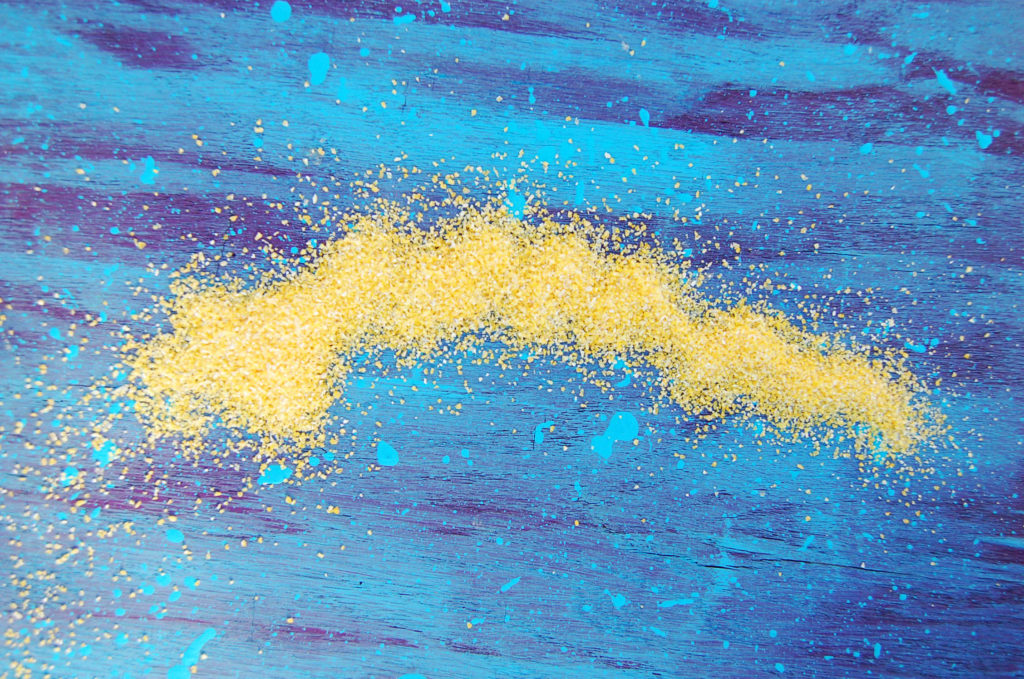 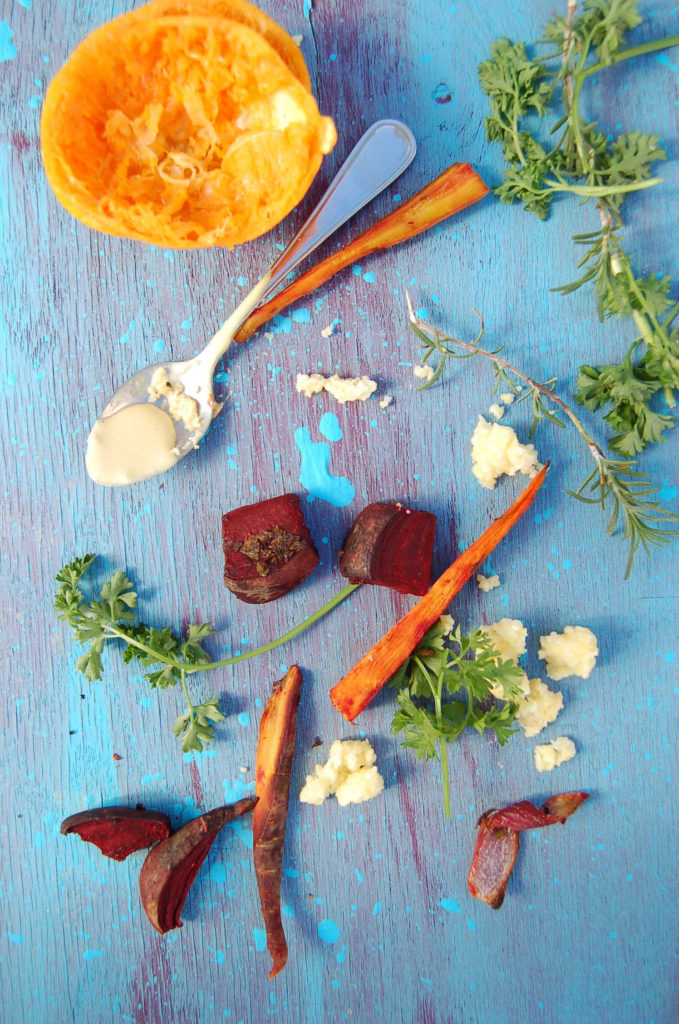 I hope that you have a happy week. May it be filled with making it easy for your body to do its thing. 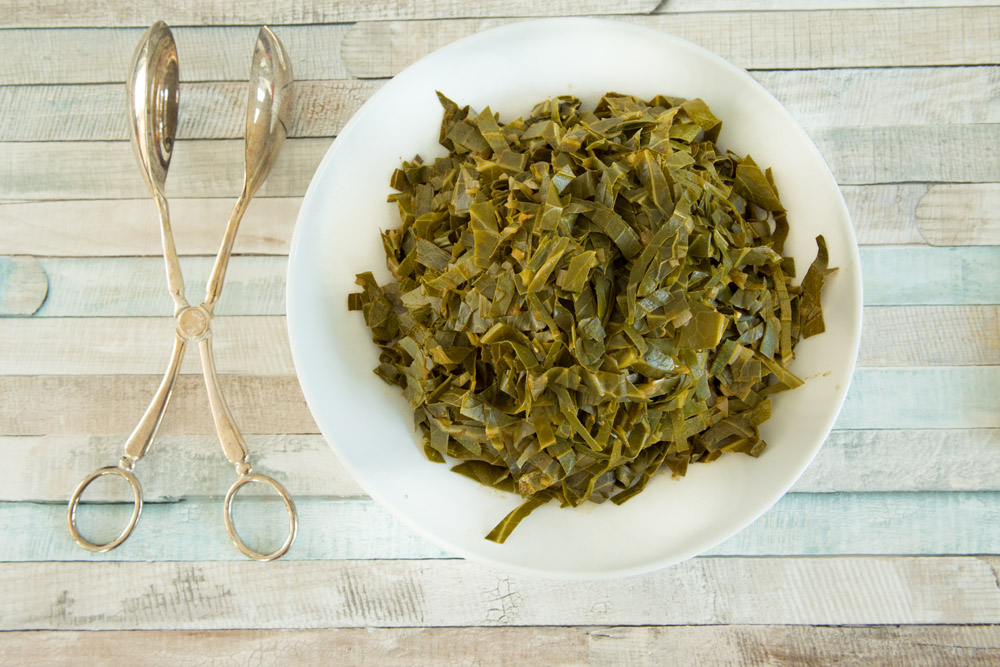 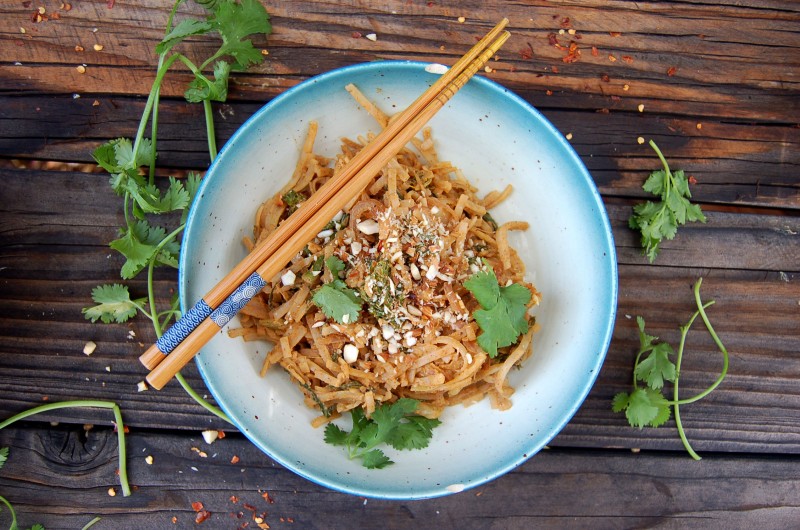 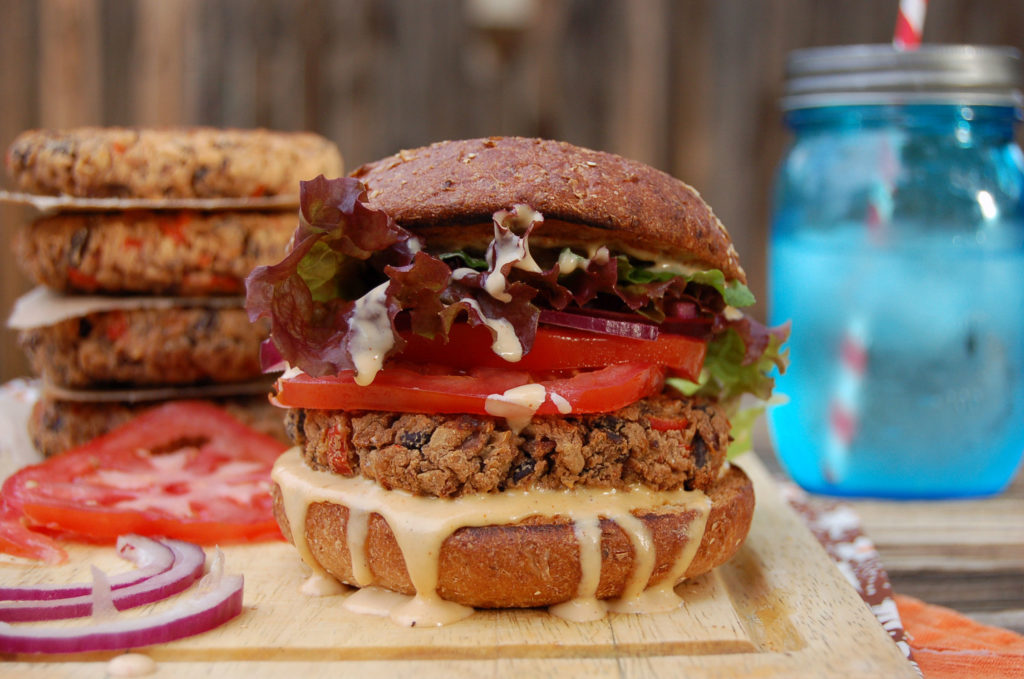