Do I have a Halloween story for you!

When my best friend, Sierra, and I were 16, we dressed up as Superman and Superwoman for Halloween.

My friend and I had planned out our costumes with care.

We bought bright red fabric to make our capes and my skirt.

We painted the Superwoman logo on my blue leotard that I bought at a thrift store.

Sierra made my skirt.

We bought matching red knee-high socks at Walmart and cut mine so they would fit over my black faux leather boots.

Sierra slicked back her hair and tied it up so it looked short, and I made a red headband out of leftover cape / skirt material.

A 16-year-old Molly Patrick and her best friend dressed as Superwoman and Superman. 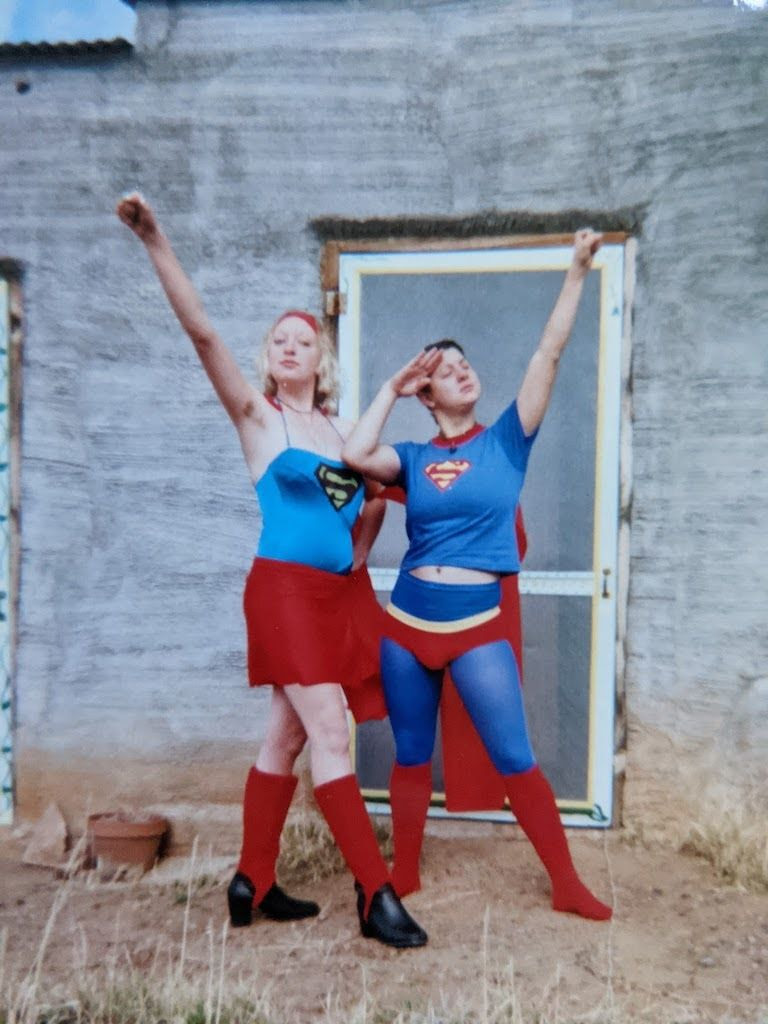 (Above: sporting our costumes)

Back when Sierra and I became teenagers, we desperately wanted to be cool, but it was painfully obvious from early on that being cool wasn’t in our cards.

So, when we were 15-years-old, we started a rumor that we were cool, and because we lived in a tiny town with approximately four people in it, by the time we were 16, the rumor had stuck.

We were getting invited to actual parties with actual humans that were deemed cool in the mid-nineties.

We had worked our magic and found ourselves in the unique position of being the uncool cool girls.

This was my first lesson in stepping up and creating what I wanted instead of waiting around wishing it were so.

By the time Halloween 1996 rolled around, you bet your ass we had an invite to what was sure to be the coolest party in town. We’re talking elite-level party goers.

All the cool skater kids would be there.

Big D, the coolest guy in our whole town, would be there with his posse and his tricked-out Chevy Impala, bouncing around from the hydraulics whilst Method Man blasted from the enormous subwoofer in the trunk.

All of the cool stoner kids would be there.

College kids from the men’s and women’s college basketball teams would be there.

It was going to be the dopest.

The night of the party, Sierra and I were nervous, but we were ready to rock our costumes at the coolest house party of the year, possibly the decade.

We had to park way down the block because there were so many cars. After we found a parking spot, we slowly walked up the block to the party house, sharing a Camel Light cigarette in the cold night air and looking at all the Halloween decorations along the way.

We were too old for trick-or-treating and too young to not be mesmerized by entire houses covered in cobwebs, littered with skeletons, and spooky music coming from the bushes.

We huddled together close, put our cigarette out, and kept walking.

We knew we were approaching the party because instead of spooky music we started hearing the familiar bass, guitar, drums, and vocals of the one band that every teenage crowd could agree on in 1996: The Beastie Boys. Specifically, their album, Ill Communication.

We kept walking, we did not stop.

Buzzing with nerves and anticipation, cold from the October night and lack of fabric on our bodies, we finally arrived to the house. We knocked on the door and waited. No one answered. We knocked again. Still no answer.

With a deep breath, we dug deep for Superhero confidence, I put my hand on the doorknob and turned. It was unlocked! I slowly pushed the door open, and as soon as the smell of weed and beer invaded our nostrils, we knew we were close.

Sierra adjusted the hiking socks in her crotch, I fine-tuned my bright red cape, and together, we stepped over the threshold and into the dream of every uncool kid ever. Or so we thought.

The room closest to the front door was empty, but we heard The Beasties blasting from the back of the house, along with laughter and shouting.

We slowly and carefully walked toward the noise, like we were trying not to step on glass. Our hearts were pounding.

As we rounded the corner, we saw, to our surprise and sheer terror, a huge group of people standing around a keg, smoking cigarettes and drinking beer from red plastic cups, and NOT ONE OF THOSE COOL MOTHER FUCKERS WAS WEARING A COSTUME.

Sierra and I looked at each other in panic. We started to turn around and quietly walked back to the front door, hoping to hell no one saw us, but it was too late.

Some drunk dude started pointing at us, “Hey, look who's here! They came to save us! Hahahahahahahahah.” Everyone in the room stopped and stared at us.

The skaters laughed.
The stoners looked confused.
The college kids rolled their eyes.

My face was bright red, and Sierra looked like she might throw up. We were deer in headlights, our capes drooping off our bodies in defeat.

Big D, taking pity on the situation, filled up two red plastic cups with beer and handed them to us. We found a corner to shrink in, drinking our beer and making an exit plan.

When our beers were finished, and we didn’t think things could get any worse, we went to throw away our cups and leave the party, trying to bring as little attention as two people dressed up as superheroes could.

But just as we started to walk away from our corner, a fight broke out near the keg, and a beer bottle came sailing across the room, hitting Superman directly in the forehead with a loud THUD, breaking on impact before falling to the floor in pieces.

Superman was too stunned to say or do anything.

The entire party stopped and stared at us for the second time that night.

I took Sierra’s hand and rushed to the kitchen, our red capes flapping behind us. I grabbed a paper towel, placed it on her head, and we bolted for the front door as fast as we possibly could.

We speed-walked to my car and hauled ass to her mom’s house to assess the damage and see if she needed stitches. She didn’t, but it left one hell of a gash, and her upper face was swollen for the next week.

Superheroes we were not.

Cool kids, not by a long shot.

Best friends who had survived another embarrassing teenage moment, now that we could claim.

I also walked away with the understanding that it's not always a straight line when you step up and create what you want.

The journey will have zigzags, twists, turns, heartbreak, challenges, and sometimes, even blood.

The path is bumpy and filled with moments that, while hard in the moment, will one day be a story that you look back on with love, compassion, and a good laugh.

Written by ex-boozer and ex-smoker, Molly Patrick that will help you eat more plants while throwing perfection down the garbage disposal.

Not for those offended by the F word.